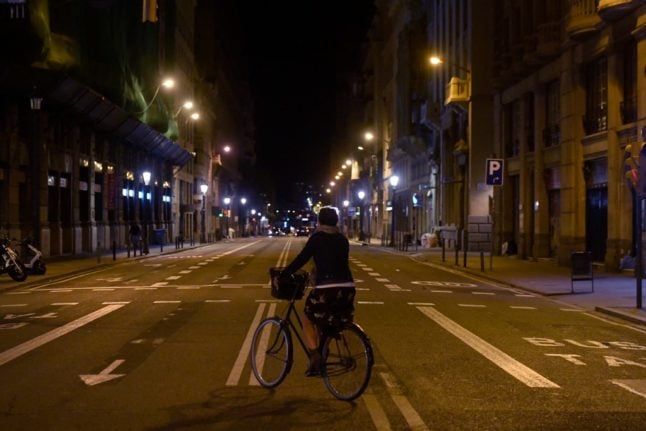 Taking a nighttime bike ride is just one of the things that will be possible across most of Spain after May 9th. Photo: Josep Lago/AFP

Spain’s estado de alarma, the state of emergency that has given regional authorities the power to swiftly introduce Covid restrictions, is set to end at the start of Sunday May 9th.

So as soon as Saturday May 8th comes to a close, many restrictions that have heavily influenced life in Spain in recent months will no longer be applicable, and regional governments will have to present new restrictions to a court for them to be approved first.

With less than two days left, Spain’s regions are deciding what their modus operandi will be post-state of alarm, with some leaning more towards keeping some restrictions in place and others embracing the easing of limitations (we will keep you updated on these when they are confirmed, so stay tuned).

What is for sure is that there won’t be a blanket lifting of every single Covid restriction in place now, nor will things remain exactly the same.

May 9th will mark for most people in Spain a step towards regaining more of our fundamental rights during the ongoing pandemic, and there are certain freedoms which we will get to enjoy again from then on, to a greater or lesser extent depending on where you are.

You should be able to stay out later

Curfews across Spain will be lifted automatically on Sunday May 9th and most Spanish regions have confirmed they will not contest this decision.

However, 6 of Spain’s 17 regions have asked their courts for permission to keep the curfew in place: the Balearic Islands, the Basque Country, the Valencia region, Castilla-La Mancha, Navarra and the Canary Islands.

Regional authorities in Andalusia and Madrid on the other hand have confirmed that the toque de queda (curfew) will be lifted and that bars and restaurants can stay open until midnight. In Andalusia, nightclubs will be able to open until 2am. Asturias has also announced it will let its bars stay open until later. You should be able to meet up with more people

It’s unlikely that regions will allow a limitless number of people to gather, although in Madrid’s case Cabinet Minister of Health Enrique Ruiz Escudero has said any limit from May 9th onwards will be a “recommendation”.

The ban on meeting with people you don’t live with at home will also be lifted in Spain’s capital.

The Balearic Islands, Catalonia, Navarra and the Valencia region have already announced they want to keep some limits on social gatherings, although in Valencia’s case authorities are studying whether to go from 6 up to 10 people, a decision that Castilla-La Mancha is also currently debating.

What is likely is that limits on social gatherings as low as four are likely to be raised across all of Spain after the state of alarm. You should be able to travel across Spain more easily

In general terms, from Sunday May 9th, the regional border closures that are still in place in some regions will be lifted and it will no longer be necessary to provide a force majeure reason for travel, therefore allowing for holidays.

The Basque Country is the only region so far which is considering keeping some form of perimeter closure in place as it has one of the highest infection rates in Spain currently. You should be able to shop more easily and for longer

Limits to opening hours and people allowed in stores at any given time will also be lifted after the state of alarm.

So far, not many of Spain’s regions have clarified if they intend to appeal for these restrictions to be maintained.

Extremadura and Madrid have announced they will increase the capacity limit for shops up to 75 percent. You should be able to eat or drink inside a bar, café or restaurant

There may still be limits on indoor seating come May 9th, but the majority of regions will at least allow bars, cafés and restaurants to open their indoor area, in many cases allowing them to open all together if they have no terrace.

Castilla y León has said that only in municipalities where the fortnightly infection rate is above 150 cases per 100,000 will interiors have to close.

But unless there’s a sudden change of plans, enjoying a coffee or a meal indoors will be possible again across Spain, even if group numbers are likely to be smaller than for terrace seating and fewer tables can be used.