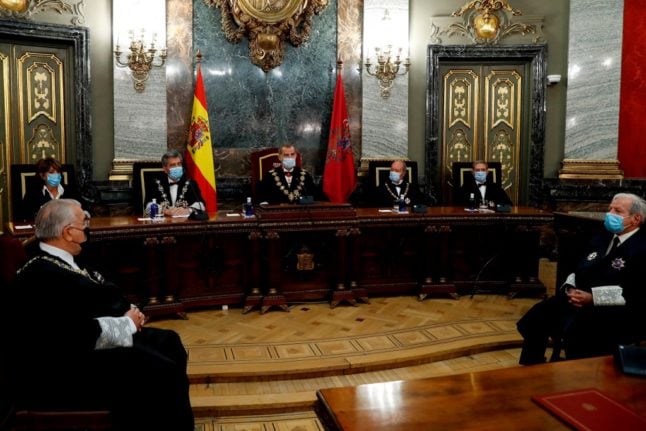 Opposition to the central government’s stance regarding the end of Spain’s estado de alarma is growing, this time among the country’s judges.

The Spanish government approved on Tuesday a Royal Decree that gives Spain’s Supreme Court the final word on what measures limiting fundamental rights can be kept or adapted by the regions after May 9th.

The aim of this is to avoid possible judicial disagreements between Spain’s 17 autonomous communities and two autonomous cities.

Spain’s two main associations of judges consider that the Spanish government has acted “irresponsibly” and not legislated correctly by just ‘passing the buck’ to them.

“The national government is evading its responsibilities, which is to legislate through parliament,” María José del Barco, spokesperson for Spain’s Professional Association of the Magistracy (APM), told 20 minutos.

“It should have given the regions enough legal powers,” she explained, recalling that Spain’s first deputy Prime Minister Carmen Calvo promised in 2020 to lay the legal foundations so that the state of alarm was not the only instrument with which to delegate during the pandemic.

“Getting out of the state of alarm means giving ourselves important tools to be able to navigate any difficult situation that the pandemic causes us,” Calvo said back in May 13th 2020.

She has since gone back on her previous statement and supported her government’s latest decree, arguing that “in 99 percent of cases the courts have agreed with the region’s decisions, except for in some rare cases”.

This may not be entirely true, however. For example, when Spain’s first state of alarm was lifted during the summer of 2020, the Basque government tried to limit gatherings to six people but the regional court rejected the measure. In neighbouring Navarre, a judge allowed for the restriction to come into force.

“The judges are not here to govern,” Tolosa stated, adding that having jueces (judges) rule on which Covid restrictions are appropriate before their implementation is “not the best system”.

However, from Monday May 10th, the restrictions in place during the state of alarm will end across Spain, including limits on social gatherings, curfews, capacity limits and more.

The modus operandi for new restrictions from then on will involve the regions having to first request judicial ratification from their regional high court of justice (TSJ).

If the proposed restrictions are denied, regional authorities can take the matter to Spain’s Supreme Court, which will have a maximum period of five days to rule on the matter.

The region will also have to present the appeal to the Supreme Court in the three days following its rejection by the TSJ.

Are regional authorities still opposed to the central government’s stance?

For the most part yes. At an interterritorial Council meeting called on Wednesday following Tuesday’s Royal Decree, regional councillors largely criticised the central government’s decision of putting the management of the pandemic “unnecessarily through court”.

Catalan councilor Alba Vergès called it “a joke” to “suddenly” end the state of alarm and that “the decision-making is transferred to the courts”.

Castilla-La Mancha councilor Jesús Fernández called for the regions to decide together which measures they wish to adopt after May 9th and to “jointly” take them to their high courts or to appeal together though the Supreme Court.

“No court will give a region a unique ruling,” he said.

To find out more about the regions in Spain where authorities have announced they will attempt to implement restrictions after May 9th, click on the link below.

READ MORE: The regions of Spain where restrictions are likely to remain after the state of alarm