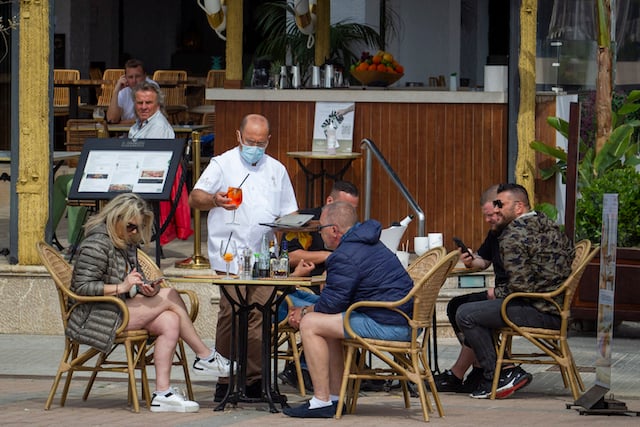 Those countries hoping to be added to the UK’s green list would have to meet several criteria including a low infection rate.

The number of people in the country who have already been vaccinated, the prevalence of variants as well as the ease with which travellers can access reliable data, are also factors that the UK will taking into consideration.

Being added to the green list is crucial because it means that UK travellers won’t have to quarantine upon return home.

While Spain as a whole has a 14-day infection rate of 249.75, its islands have significantly less.

The Canary Islands currently has a 14-day infection rate of 97 cases per 100,000 inhabitants, while the Balearics only has an incidence rate of 61 per 100,000. The infection rate has been dropping gradually in both regions, according to Spanish health ministry data.

Iago Negueruela, the Balearic’s tourism minister, told The Telegraph: “The British Government should take the epidemiological situation of separate regions into account, rather than different countries”.

“We have… the technology available to sequence the virus and its variants at a higher percentage than any other region [one of four factors set by the UK Government]. We have made huge efforts to contain the pandemic, and the epidemiological figures for the Islands are among the best in Europe,” he added.

The UK’s Foreign Office currently “advises against all but essential travel to Spain, including the Balearic Islands but excluding the Canary Islands”, which gives hope that the whole country won’t receive the same colour categorisation from the UK’s Global Travel Taskforce.

The Balearic Island government is desperate to get on Britain’s green list and president Francina Armengol has also called on the British government to examine the number of coronavirus cases per island rather than the region.

Menorca, for example, which is very popular with British tourists, only has 85 active cases on the whole island, much lower than Mallorca.

Last week, Canary Island Tourism Minister Yazia Castilla also asked the British government to treat the Canaries as a “special case”, separate from the rest of Spain, but admitted that she didn’t think that the Canary Islands would be added to the green list because they would have to halve their number of cases by May 17th.

What restrictions are currently in place in the Balearics and the Canaries?

The Balearics currently has a curfew between 11pm and 6am. In Mallorca and Ibiza, the interiors of bars and restaurants are closed, but eating on the terrace is allowed. Bars and restaurants on the two islands can open from 8pm to 10.30pm Monday to Thursday. Friday through Sunday, they must close at 5pm. Shops can open to a 75 percent capacity until 9pm.

In Tenerife, which has just moved to level 2 of the islands’ restrictions, bars and restaurants can open their terraces as well as indoors now. Groups of six can now meet rather than just 4.

The other islands at level two – Gran Canaria, Lanzarote and El Hierro – can also open bars and restaurants to a capacity of 50 percent inside and 75 percent on the terraces, with table numbers at four and six respectively. They must close by 11pm.

Islands at Level 1 – Fuerteventura, La Palma and La Gomera – can open their bars and restaurants until midnight. Up to 10 people can sit on a table on the terrace and six inside.