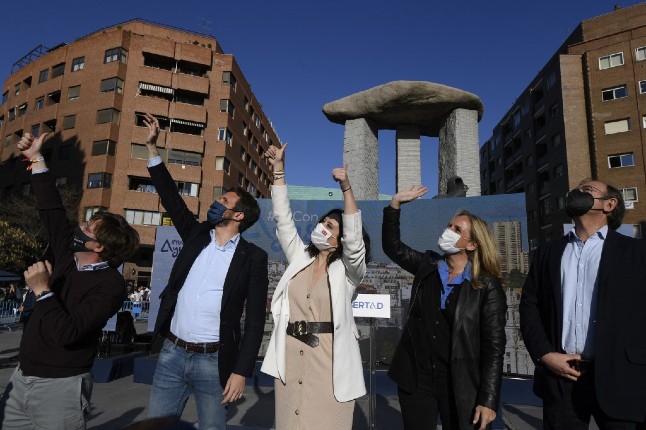 Spanish conservative People's Party (PP) leader Pablo Casado (2ndL) and Madrid regional president Isabel Diaz Ayuso (C) give thumbs up at supporters as they kick off the campaign for her reelection in Madrid on April 17. Photo: Oscar del Pozo/AFP

In a country still divided over its 1936-39 civil war and the dictatorship of Francisco Franco that followed, echoes of the past have entered campaign rhetoric with parties labelling each other “reds” and “fascists”.

The polarisation has drowned out debate over the Madrid regional government’s handling of the pandemic and the policies of the conservative Popular Party (PP), which has governed Spain’s richest region since 1995.

Polls suggest the PP will win by a wide margin although they will fall short of a majority in the Madrid regional assembly and will need the support of far-right party Vox to govern.

Aside from the verbal insults, the campaign has been marked be death threat letters with bullets sent to top politicians, including the leader of far-left party Podemos, Pablo Iglesias.

Podemos is the junior partner in Sanchez’s minority coalition government. Isabel Diaz Ayuso, the outgoing leader of the Madrid regional administration who is a rising star in the PP, set the tone for the campaign in March when she called the early election, saying it would allow voters to choose between “Socialism or freedom”.

She has made Sanchez the focus of her attacks and has consistently pushed back against central government pressure to impose tighter virus restrictions and lockdowns, arguing that keeping the economy afloat and preserving social
interaction is also important for health.

Madrid has Spain’s laxest virus restrictions and it has been the only major European capital to keep bars, restaurants and theatres open with few restrictions since a nationwide lockdown ended in mid-2020.

“Having beers is important. After a bad day a beer cheers you up,” Diaz Ayuso, 42, said during an interview with the Ser radio station last month.

Final opinion polls give her PP party around 40 percent support, almost double the result in the previous election in May 2019, and well ahead of the Socialists who have seen their backing drop to 20 percent from just over 27 percent in the last polls.

The pandemic has hit Madrid hard with the region accounting for nearly 20 percent of Spain’s over 78,000 Covid-19 deaths, prompting opposition criticism over Diaz Ayuso’s handling of the health crisis.

But Diaz Ayuso blames Sanchez, accusing him of having left management of the pandemic to Spain’s powerful regional governments, which are in charge of health and education.

Leftist parties have sought to rally their voters by warning of the dangers of the PP governing with the backing of anti-immigrant party Vox, which does not hide its nostalgia for the Franco era.

Sanchez has warned that “our democracy” is at stake in the election. Antonio Barroso of Teneo consultants said a defeat of the left in Madrid “is unlikely to make a difference” in the national government’s ruling coalition between the Socialists and Podemos, since it is not in Sanchez’s interest to bring forward a general election.

“A decisive victory by Diaz Ayuso will probably give a boost to the PP on the national level level,” he added.

It could also be seen as a vindication for her more hardline positiions and “lead to internal quarrels” over the leadership of current PP head Pablo Casado, who has become more centrist in recent months, Barroso said.