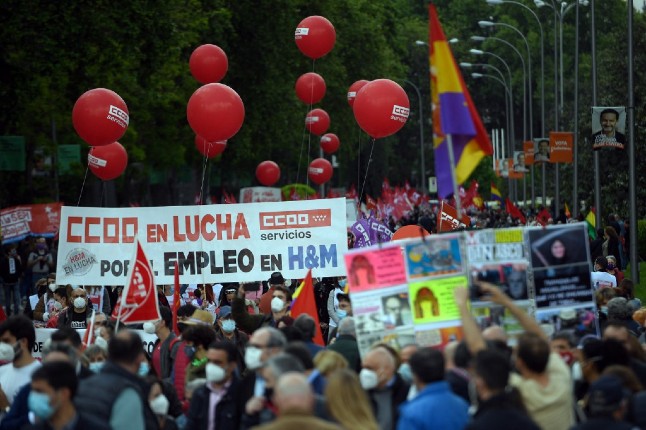 Wearing masks and observing social distancing, demonstrators marched through the streets waving banners although in many places, numbers were capped to ensure anti-Covid measures were respected.

The main demonstration in Madrid, which was limited to 1,000 people, began at midday under the slogan “Now it’s time to deliver” with the participants marching from the town hall to the city’s Puerta del Sol square.

Members of the Union General de Trabajadores – UGT (General Union of Workers) held a banner in front of Madrid city hall (see below).

Seven government ministers attended the march, including Labour Minister Yolanda Diaz as well as representatives of the three left-wing parties running in Tuesday’s regional election in Madrid, including The Podemos party leader and candidate Pablo Iglesias (in picture below).

Many of the banners called for the public to be more outspoken about the economic and social problems facing Spanish society.

And here’s a woman wearing a face mask inscribed with the words “Don’t keep quiet”.

At the rally, union leaders Pepe Alvarez of the UGT and the CCOO’s Unai Sordo urged the government to honour commitments delayed by the pandemic, such as repealing a controversial labour reform, raising the minimum wage and approving a law on equal pay.

Addressing the march, Diaz said employment was key for overcoming the crisis. “The crisis has made us face up to an outdated labour model, based on casual work, seasonal employment and inequality.. which is exactly what the labour ministry has started to change,” she said in remarks broadcast on Spain’s RNE radio.

“This May 1 is not just any other day because the values of dignified employment, solidarity, equality and social justice — which are embodied today — are undoubtedly the most effective response to the economic and social crisis we’re experiencing.”

Spain has been badly hit by the pandemic and is due to receive 140 billion euros ($167 billion) worth of EU funds between 2021 and 2026 to help its virus-battered economy.

But Alvarez said it was critical to ensure the funds were used “to face up to the needs of its citizens and.. to make a change to its production model”.

In Barcelona, some 3,000 people joined the May Day marches, unions said,  with many representing Comisiones Obreras – CCOO (Workers’ Commissions) taking part  (see below9, while in Mallorca, demonstrators joined a vehicle convoy in the capital Palma to avoid the rain, RTVE television reported.