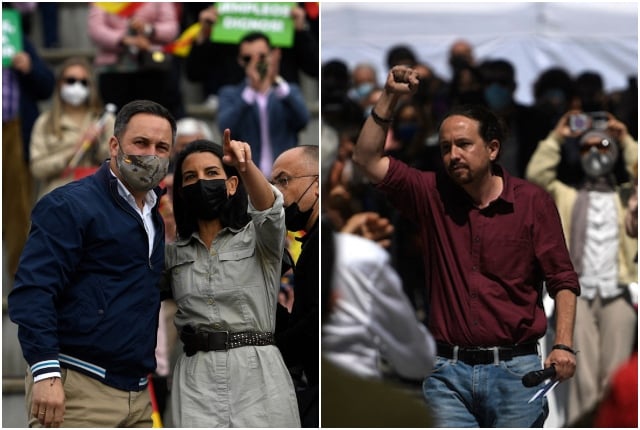 “It’s a shame because the campaign hasn’t covered the real problems of the people of Madrid,” said 33-year-old data analyst Javier Carretero.

He said there was little debate over his main concerns – unaffordable rents for young people and the lack of public investment, especially in health care.

Opinion polls suggest the right-wing Popular Party (PP) of outgoing regional leader Isabel Diaz Ayuso is on track to win the most seats in the May 4th ballot.

But without an absolute majority, it will once again need support to govern Spain’s richest region, likely from the far-right Vox.

With the entry of far-left Podemos leader Pablo Iglesias into the race after he stepped down as deputy prime minister, Ayuso has characterised the vote as a choice between “communism or freedom”.

And the left has jumped on the bandwagon, adopting its own slogan of “Democracy or fascism” after several of their leaders, among them Iglesias, received death threats in letters containing bullets, electrifying an already tense campaign.

Socialist Prime Minister Pedro Sánchez has also waded in, warning that what was at stake in the election was “not Madrid” but “our democracy”.

“The right is creating a circus” so the PP will remain in power, said Antonio Cardenas, 47, as he left the pharmacy where he works in Arganzuela, a neighbourhood in southern Madrid.

And the left is trying to mobilise its voters by taking advantage of “violence and polarisation,” he added.

READ ALSO: FOCUS: Why Madrid’s regional elections are so important for Spanish politics

Felix Anguas, a retired PP voter, said the pandemic and the “economic situation” were his most pressing concerns.

Madrid is the region of Spain with the most infections and deaths from Covid-19. But while the pandemic dominated the start of the campaign, the issue of the region’s handling of the crisis was quickly eclipsed by mudslinging between parties.

Those on the right largely applaud Ayuso whose government has imposed the country’s most lenient restrictions and has clashed with Spain’s leftist government over the issue.

Zapata said she has managed the situation “in the best way” by allowing bars and restaurants to remain open and as a result “there is not as much unemployment”.

But for 44-year-old graphic artist Antonio Huelva, Ayuso’s policies were nothing short of “horrible” because they have “let people die”.

Madrid has consistently had one of Spain’s highest infection rates.

Against this backdrop of deep polarisation, many voters said they still don’t know if they will bother to vote.

“I’m not convinced by any of the candidates, they all talk a lot and do nothing,” said 62-year-old lawyer Carmen Mendez who was still not sure if she would end up casting a ballot.