A pupil at a school in the German state of Hesse in April. Photo: picture alliance/dpa | Sebastian Gollnow

The company has already filed a similar request with US authorities earlier this month. Its vaccine is currently only approved for use in people aged 16 and over.

In a joint statement, Pfizer and BioNTech said they had submitted a request with the Amsterdam-based European Medicines Agency (EMA) to expand the use of their jab to include “adolescents 12 to 15 years of age”.

Ugur Sahin, co-founder and CEO of Germany’s BioNTech firm, on Thursday said the jab could be available for those age groups from June if EU approval is granted.

The move comes after phase 3 trial data showed that the vaccine provided “robust antibody responses” and was 100 percent effective in warding off the disease among those aged 12 to 15.

“The vaccine also was generally well tolerated,” the statement added.

In an interview with Germany’s Der Spiegel weekly, Sahin said he expected regulators’ evaluation of the data to take four to six weeks.

If approved, the green light would apply to all 27 European Union member states.

Pfizer and BioNTech added that they also plan to seek authorisations “with other regulatory authorities worldwide”.

No coronavirus vaccines are currently authorised for use on children.

While children and teenagers are less likely to develop severe Covid, they make up a large part of the population and inoculating them is considered key to ending the pandemic.

The prospect of getting older children jabbed before the next school year begins would also ease the strain on parents who are juggling the demands of homeschooling while keeping up with jobs.

“It’s very important to enable children a return to their normal school lives and allow them to meet with family and friends,” Sahin told Spiegel.

Plan for vaccination of younger children

BioNTech and Pfizer are also racing to get their jab approved for younger kids, from six months upwards.

“In July, the first results for five- to 12-year-olds could be available, and those for younger children in September,” Sahin said.

Ongoing trials so far are “very encouraging”, Sahin said, suggesting that “children are very well protected by the vaccine”.

BioNTech was founded in Mainz by husband and wife team Ugur Sahin and his wife Özlem Türeci. They teamed up with US pharma company Pfizer to produce the shot which is based on novel mRNA technology, and was the first Covid-19 jab to be approved in the West late last year. 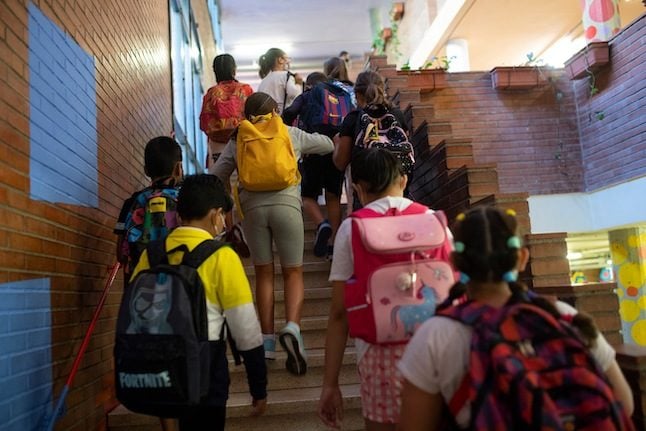