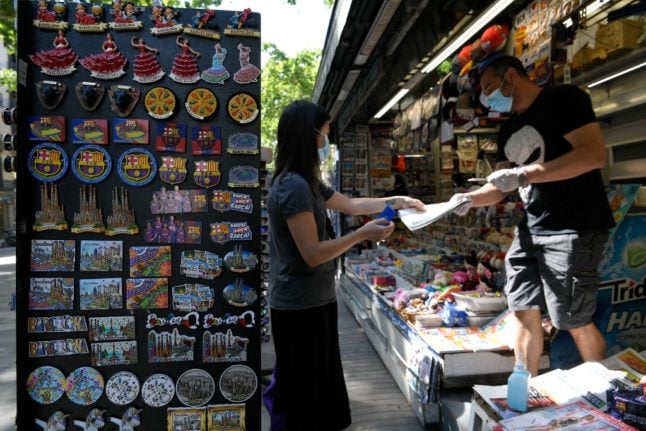 In Spain, the word tacaño (stingy) is often thrown together with the word catalán when it comes to describing the people from the north-eastern region, but is this a fair assessment of their character?

How did the stereotype come about?

According to Spanish national newspaper ABC, this stereotype dates all the way back to before the 14th century, and it was in fact Italians, not Spaniards, who started it all.

In his book Divine Comedy, published in 1320, Dante Alighieri (pictured above) wrote “If my brother could foresee this, he would avoid the greedy poverty of the Catalans, so as not to receive any harm”.

As seen from the quote by the Florentine poet, even back in medieval times, the best way to insult a Catalan was to talk about the fact that he kept his wallet firmly in his pocket.

This prejudice soon spread throughout Italy, particularly when Catalan merchants and soldiers came to rule over Sardinia in the 1400s.

However, it wasn’t until the 18th century that this stereotype arrived in Spain. Because of its strategic position, on the coast and close to the rest of Europe, Catalonia became a very wealthy region and was home to many merchants. It was customary that the second son of well-off Catalan families would dedicate himself to commerce and trade.

READ ALSO: The good, the bad and the ugly – What are the regional stereotypes across Spain?

“The people of Spain knew the Catalans for their commercial activity, in the same way that the Castilians were identified as civil servants and lawyers”, explains Ángel Puertas, author of the book Cataluña vista por un madrileño (“Catalonia as seen by a person from Madrid”), which seeks to dispel some of the common clichés about the Catalans.

As a result, they were often seen as being rich, and to rub them up the wrong way during arguments, the Spanish would call them stingy and compare them to Europe’s Jewish moneylenders, who suffered the same stigma at the time for being miserly.

Is there any truth to the stereotype?

So, is the just an unfair prejudice that dates back over the centuries or does it have any truth in modern society?

A study by Spain’s Sociological Research Centre (CIS) stated in 1995 that 35 percent of Spaniards from outside Catalonia considered Catalans “stingy”, while only 15 percent of them applied that character trait to themselves. Needless to say, there’s no evidence CIS has carried out any similar studies since, perhaps because they don’t exactly help to debunk stereotypes or lessen animosity between regions.

It’s probably true that even in 2021 the catalán tacaño cliché is mainly perpetuated by Spaniards from other regions, but what do Catalonia’s foreign residents think? Do they agree with the label?

Venezuelan Barcelona resident Karina Cova told The Local Spain that she agrees that the stereotype sometimes rings true. “Even amongst my Catalan friends, whenever we talk about money or try to split the bill and I tell someone, now you owe me or I owe you, they tell me that I sound like a Catalan,” she says.

“I am also currently planning my wedding and many of my friends are asking me if I’m going to do it the Catalan way, where each guest pays for their own meal,” Cova told The Local.

Another foreign Barcelona resident who preferred to remain anonymous told The Local Spain that she can attest to this after she attended a wedding of a local Catalan friend and was expected to pay for the €150 menu on the big day.

Catalonia resident Marco, who’s originally from the Canary Islands, also believes that the saying is true. “I have a Catalan friend who keeps an Excel spreadsheet, detailing every single euro he is owed or owes to others,” he says.

Barcelona Chamber of Commerce President Miquel Valls thinks that the Catalans are not stingy at all, and are actually very generous.

“This is constantly seen through our solidarity campaigns,” Valls is quoted as saying in local news site Catalan News, noting that Catalonia is one of the European regions that gives the most through NGO aid to third world countries.

“Catalans are also hard-working and thrifty,” he says, adding that the stereotype is just the root of a historical myth.

Catalonia is Spain’s second economic region, just slightly behind Madrid, making up 19 percent of the GDP. Because of this, Catalonia reportedly pays a higher level of tax than other poorer Spanish regions. Many Catalans cite this as an example of why they are in fact generous and not miserly at all, including Valls.

But could this same fact, be one of the reasons why the rest of Spain might still see them as stingy today?

What does The Local Spain’s Catalonia reporter think?

“Catalans generally think they pay more taxes than the rest of Spain and I do think there’s plenty of truth to it,” Barcelona-based journalist Esme Fox writes.

“But it’s also true that this is one of the reasons (among many other complicated ones) that many want Catalonia to become an independent nation. Some Catalans feel that Spain is robbing Catalonia of its wealth and that they would be better off managing their own finances and their own country.

“As a foreigner living in Catalonia myself, I haven’t noticed Catalans being particularly stingy at all, in fact, there have been many times when they have been overly generous to me. A Catalan client I worked for would always give me gifts when it was a special occasion, and invite me round for dinner.

“Another Catalan offered to give me an additional service for free when she knew I couldn’t decide because of the extra expense involved.

Next time you’re in Catalonia, try being extra generous to someone and see what happens, most likely you’ll find that it’s reciprocated.

Hamburger franchise Burger King is the subject of disciplinary proceedings in Catalonia in the latest chapter of linguistic turmoil in the region.

Catalonia’s Consumer Agency is currently studying the complaint of a customer who noticed that the self-service screens of the fast-food restaurant no longer included the menu or ordering options in Catalan.

“The electronic panel did not show Catalan as an option, so customers have not been able to order in our own language, a fact that contravenes the code and the law of Catalonia’s Generalitat,” wrote Xavier Dengra i Grau.

The complaint, which was initially filed two years ago, will now be studied by the Consumer Agency to assess the “alleged violation of consumers’ linguistic rights or the failure to comply with the linguistic obligations established by law”.

If found guilty, Burger King would have to pay €10,000 for what’s considered a minor infraction in Catalonia’s consumer code.

According to Catalan law, all manner of businesses in the region have the legal obligation to communicate or offer services in Catalan. Catalogues, contracts, pamphlets and restaurant menus therefore have to be in Catalan as well as Spanish.

It’s not the first time Catalan authorities ‘have beef’ with the hamburger franchise empire.

But it’s the linguistic debate raging in the region that’s a particularly prickly subject, given the connection the Catalan language has to the region’s identity and in many cases the separatist views of some of its inhabitants.

READ ALSO: Why Catalan separatists are in crisis five years after independence vote

The latest divisive matter has been focused on Catalan vs Spanish in schools. A ruling that 25 percent of school lessons in Catalonia have to be in Spanish is reportedly not being respected by Catalan authorities.

HIKING
Eight of the best hikes in Catalonia
Url copied to clipboard!