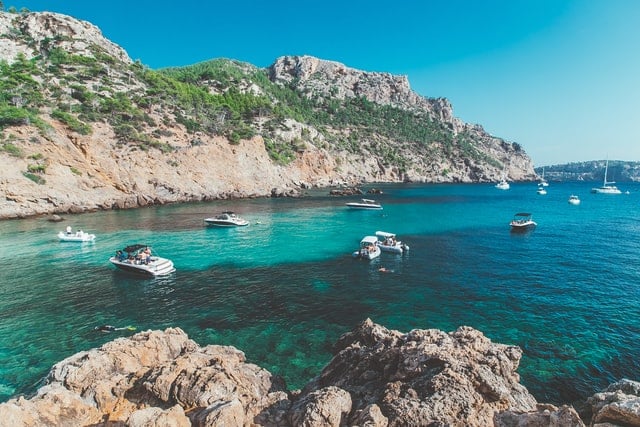 A beautiful cove in Mallorca, one of hundreds the Balearic island has to offer.Photo: Eugene Zhyvchik/Unsplash

In recent interviews over the past few weeks, Spain’s Secretary of State for Tourism Fernando Valdés has said that his country “cannot afford another summer like 2020’s” and that his ministry is “desperate to welcome” British tourists back.

UK holidaymakers are of course crucial to the recovery of Spain’s ailing tourism industry, representing 22.5 percent of international tourists in 2019 – 18 million people who spent €17.9 billion on their Spanish holidays.

The reality is that for Spanish tourism to return to normal, coronavirus travel restrictions in both countries have to align themselves in time for summer, from Spain allowing non-essential travel for non-EU visitors (including Brits), to the possible inclusion of Britain in a Spanish vaccine passport scheme and of course the UK’s upcoming “green list”.

Come May 17th 2021 outbound travellers from the UK will most likely no longer need to provide a “reasonable excuse” to leave the country, including to go on holiday abroad.

The UK’s Global Travel Taskforce, the official body responsible for helping set out the travel rules for the United Kingdom, plans to provide a list of green, amber and red countries to assess the risk of travel from that date until its next evaluation.

Travelling to “green” destinations has the lightest requirements, currently a Covid-19 test before travelling back to the UK, a PCR test on or before day 2 of arrival back in the UK but no need to quarantine unless the PCR test is positive.

It hasn’t been touted as one of the nations that will definitely appear on the “green” list either, which several sources are saying will include 30 countries (several Caribbean nations, Morocco, the Maldives, Iceland and Israel are reported to be definite green-listed ones).

However, the possibility of establishing safe travel corridors between Spain and UK as was attempted in 2020 as well as other bilateral agreements mean that it is very likely that regions of Spain will be open to British tourists by June 2021.

Spain’s islands will most likely open to UK tourists first

The UK’s Foreign Office currently “advises against all but essential travel to Spain, including the Balearic Islands but excluding the Canary Islands”, which gives hope that the whole country won’t receive the same colour categorisation from the UK’s Global Travel Taskforce.

Spanish authorities believe the UK will include the Mediterranean archipelago on its “green” safe travel list, which would mean no quarantine for British holidaymakers on their return to the UK. As things stand, the Balearics actually have a fortnightly infection rate of 61 cases per 100,000 inhabitants, one of the lowest in Spain.

The Canaries on the other hand had seen its infection rate rise during Spain’s fourth wave but the incidence has been falling over the past week to the current 97 infections per 100,000 people. Throughout the pandemic the Atlantic islands have kept one of the lowest infection rates of all regions, which may explain why they’re still the only part of Spain that the Foreign Office is not discouraging travel to.

The fact that the Balearics and the Canaries are islands where travel flows can be more easily controlled, as well as their comparatively lower infection rates during the past year, has meant Spanish tourism authorities have for months been planning to restart tourism and test new travel schemes there first.

However, the fact that the UK requires a fortnightly infection rate below 50 cases per 100,000 people (among other factors) to consider including somewhere on its “green” list lead the Canary Tourism Minister Yaiza Castilla to forecast in late April that her islands “won’t be on that list”.

Speculation in the Spanish and British press has continued into the month of May, with conflicting information suggesting that both archipelagos will be taken off the list and other reports saying the Canaries will be included but the Balearics won’t and vice versa. Even the current message on the FCDO that “advises against all but essential travel to Spain, including the Balearic Islands but excluding the Canary Islands” has been misconstrued as the official May 17th announcement, when the British government has not yet made any new “green list” information public.

What about holidays in the rest of Spain, especially on the Costas?

There are popular tourism destinations such as the Costa Blanca in Alicante province (Valencia region) where infection rates have been kept very low, with an average fortnightly rate of around 43 infections per 100,000 inhabitants for the past three months.

Neighbouring Murcia has also had a lower infection rate than the national average in 2021, although it has been slowly rising since the fourth wave of the coronavirus began in Spain. The Murcian government is planning to roll out free Covid travel insurance for its international visitors from July to encourage travel.

The situation for Spain’s two other popular coastal destinations among UK tourists – Catalonia and Andalusia – remains even more unclear as they currently have fortnightly infection rates in the “high risk” and “extreme risk” categories respectively, above 200 and 250 cases per 100,000 inhabitants respectively.

The Association of Hotel Entrepreneurs of the Costa del Sol (Aehcos) has called for the Spanish government to “do all the necessary ‘lobbying’ through the central government so that in the short term Andalusia in general, and Malaga airport in particular, set up a “green corridor” with the United Kingdom and that despite Brexit, the conditions to the movements of British citizens to Spain are made more flexible”.

There is one other major criteria which the UK will include in its risk classification that could prevent regions with very low infection rates such as Valencia from being added to the “green list”: the percentage of the population that has been vaccinated.

All regions in Spain, including the Canaries and the Balearics, have vaccinated between 8 and 9 percent of their population with both doses, with the national rate standing at 8.32 percent on April 27th.

The UK by comparison has one of the most advanced vaccine rollouts in the world, with 33 million people having received at least one dose.

The only other risk criteria that clearly favours Spain’s chances of appearing on the UK’s “green list” is that the most prevalent Covid variant in Spain is the British one, but this may pale by comparison with the importance of Spain’s slow vaccine campaign and high infection rates, although the latter now seem to be plateauing.

There’s also the possibility that destinations on the “green” or “amber” list could be made off-limits if the Foreign Office publishes its own travel advice which is different to the government’s planned traffic-light system, The Times reported on Saturday.

Budding British travellers will just have to wait until May 17th to know if they can visit Spain hassle-free, or which parts specifically, but the forecast is not as promising as second home owners and holidaymakers may have hoped for.