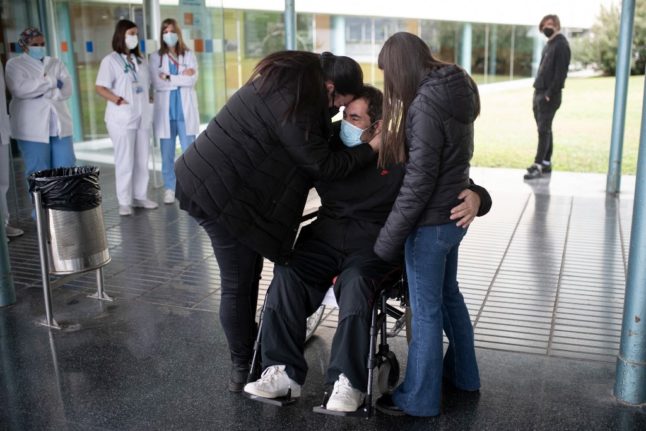 Healthcare workers accompany Carlos, 52, sick from Covid-19, as he meets his wife and daughter for the first time after his admission three months ago and one week after leaving the Intensive Care Unit (ICU) at the Hospital Del Mar in Barcelona, on January 25, 2021. Josep LAGO / AFP

On March 29th 2021, just as the Easter holidays were about to start in Spain, the country’s Health Emergencies Coordinator Fernando Simón said for the first time that Spain was indeed entering the fourth wave of the coronavirus, but that it could end up being “a little wave”.

This diminutive categorisation, which was seen as a misplaced joke by other Spanish epidemiologists, was dependent according to Simón on whether restrictions on mobility over Holy Week worked in stopping the spread of the virus.

The evidence suggests that this did not pan out as hoped by Spanish authorities. After lowering the national fortnightly infection rate below the high risk level by mid march March (127 cases per 100,000 people), it started inching up again even before Easter and by mid-April stood at “extreme risk” levels in half of Spain: over 250 infections per 100,000 people over 14 days.

Despite the alarming figures, Simón’s forecast seems to be coming true this time.

Unlike Spain’s other waves, in which the rebound from the minimum infection rate was immediate, this new increase has been a much smoother and irregular rise .

There have been days in which the infection rate has even decreased within its general upward trend.

By April 23rd 2021, Spain’s Health Ministry reported that the incidence of the virus had plateaued, referring to it as “the start of stabilisation”.

Spain’s fortnightly infection rate has risen by 100 points in a month but a look at the incidence data from the past seven days shows that it stands at 108 cases per 100,000 people, whereas the 14-day rate is around 235 infections per 100,000.

“If the seven-day incidence is below 50 percent of the 14-day incidence, that means that the curve is falling,” Jesús Molina Cabrillana, spokesperson for the Spanish Society of Preventive Medicine, Public Health and Hygiene, is quoted as saying in El País.

Why is Spain’s fourth wave not as severe as others?

Inter-regional border closures over Easter may have played their part in helping to make this latest wave of coronavirus in Spain not as serious overall, but Spain’s vaccine campaign is likely to have been even more crucial.

Over 80s in Spain have now practically all been fully vaccinated and the regions are now vaccinating their over 70s population, meaning that those that are generally most vulnerable to the virus and most likely to die or be admitted to the ICU, have been immunised. According to Spain’s Daily Mortality Monitoring System (MoMo), the country’s excess mortality has been reduced by 60 percent during the fourth wave when compared to the first one. Their graph above shows Spain’s monthly excess mortality numbers from before and during the pandemic.

The R number, the rate which measures on average how quickly and how many people a person with Covid infects others, has also fallen below 1.0, levels the Spanish government feels it can control.

Pressure on hospitals has increased slightly up to 22.6 percent of occupancy of ICU beds but health centres are not as overwhelmed as they were in March and April of 2020.

However, despite the evidence suggesting that fewer people in Spain are being hospitalised or dying from Covid-19 during this fourth wave, daily infections are still at very high levels.

From Thursday to Friday of last week, 11,731 new cases were reported in Spain over that 24-hour period.

How does the fourth wave compare to Spain’s previous waves?

Spain’s first wave, which began in March 2020 when the world was coming to terms with the reality of the pandemic, has been the country’s worst to date in terms of deaths, hospitalisations and infections.

The true rate of infections in these early days of testing are not fully known, but a study conducted by Eurosurveillance found that 62 percent of over 80s who caught Covid-19 during the first wave in Spain died.

Following two and a half months of lockdown and a deconfinement plan which led Spain to ease restrictions and restart tourism over summer, the second wave developed in November 2020.  Fortnightly infection rates exceeded 500 cases per 100,000 inhabitants and without strict lockdowns in place, the speed of descent of the infection curve slowed down.

In fact, Spain’s segunda ola (second wave) almost overlapped with the third, which began to skyrocket at the beginning of January 2021 after travel and gatherings were greenlighted by the government over Christmas.

By that stage, hospitals were better prepared and Spain’s testing capacity had been reinforced, meaning that Covid deaths were lower than during the first wave and ICUs weren’t as overwhelmed. The higher number of PCR tests being carried out did result in the number of reported infections being considerably higher during Spain’s third wave than during its first and second ones, as seen in the graph above by Spain’s epidemiological society.

But in terms of actual coronavirus deaths, Spanish health ministry data shows more than 45,000 for the first wave . From July to December 2020, which encompasses the second wave, more than 20,500 Covid deaths were reported by Spain’s Health Ministry.

There is no official recount of total deaths from Covid-19 for Spain’s third wave but a total of 19,200 people did lose their lives to Covid-19 between December 2020 and February 2021, according to data provided by Spain’s National Epidemiological Surveillance Network (RENAVE). Almost the same amount of people died in two months as in about six during the second wave.

As of April 26th 2021, Spain’s total number of coronavirus infections since the pandemic began stands at 3.46 million and the number of deaths has reached 77,591.