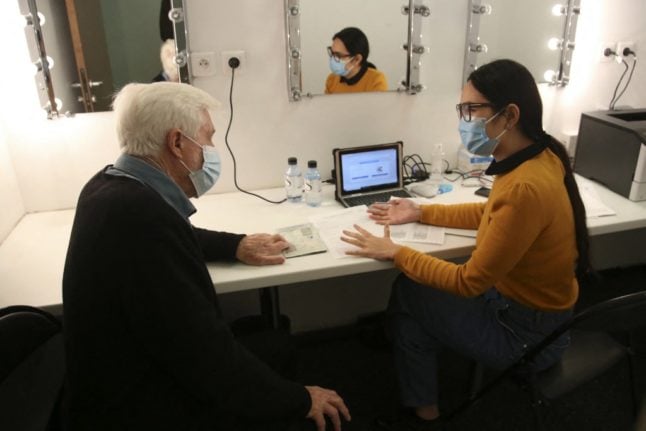 Gerard Martínez from Balcells Group in Barcelona explained to The Local that the vast majority of residency problems they are seeing now involve foreigners not knowing the best path to residency and not being sure about what their options are.

Most British people who weren’t able to settle in Spain before December 31st 2020 are unaware of how they can legally gain residency in Spain now, he told us.

Mark McMillan from Sun Lawyers in Alicante on the other hand said that most of his clients were those still trying to apply for their TIE residency cards. “If a British citizen obtained their padrón certificate before the end of 2020, the door is still open for them to submit a residency application under the Withdrawal Agreement,” he told The Local Spain.

“But problems arise when people do not provide enough evidence of legally residing in Spain before the end of 2020,” he explained. McMillan added that the padrón certificate is the most widely accepted form of evidence.

READ ALSO: Empadronamiento in Spain: What is it and how do I apply?

But what about those who did not get their padrón certificates for whatever reason before the December 2020 deadline?

Diego Echavarria from Fairway Lawyers in Marbella told The Local that the majority of their time is currently taken up with applying for appeals for those people who have had their residency applications rejected, specifically for not providing enough or the right kind of evidence.

“The most common rejection reason I see is because people did not have medical health insurance in Spain issued before 2021,” he explained.

“Or maybe they were asked to send extra documentation as proof that they were living here before 2021 and they didn’t,” he said.

Echavarria went on to explain that many British people were trying to apply for residency whilst they were still in the UK and were not actually legally living in Spain at the time, so are therefore not covered under the Withdrawal Agreement.

“Many of these people don’t qualify and get rejected,” he told us.

READ ALSO: How much money do Britons who don’t fall under the Withdrawal Agreement need to move to Spain?

“Documents such as rental contracts do not work as evidence because of cases such as these. You must prove that you were physically in Spain by providing evidence such as transport tickets, mobile phone contracts, credit card receipts from petrol stations, and receipts from supermarkets and restaurants,” he explains. “The first thing I do when I get a new client who is having issues with gaining residency under the Withdrawal Agreement, is ask them to provide me with their bank statements over the last six months, so we can get all this paperwork together”.

READ ALSO: Brexit Q&A: What happens if I didn’t register as a resident in Spain by December 31st?

Why are the residency applications taking so long to be processed?

“There are several reasons, but basically all are related to Covid,” explains Martínez.

“First of all, during the first months of lockdown in Spain, the Spanish administration had trouble reorganising itself and figuring out how to manage all the procedures that were carried out in person before. That generated the severe delays that we are still seeing now,” he tells us.

“Furthermore, due to all existing restrictions, it is harder to get an appointment to get your residency card, hence the whole application process lasts longer”.

As well as the pandemic – public servants falling ill or having to work from home – Echavarria believes that many of the delays were caused by the fact that everyone was trying to apply or exchange their residency cards at the last minute, all at the same time, and that authorities didn’t have the resources to keep up with the demand, creating a huge backlog in applications.

READ ALSO: BREXIT: What Britons need to know about visas for Spain

So how long are residency applications actually taking to be processed right now and what can you expect?

Martínez from Balcells Group says that on average, residency applications for his clients are taking between three to six months to be processed from start to finish.

Echavarría from Fairway Lawyers agrees, saying that his clients average around four to five months to get their residency cards. “It takes around two months to be approved, then you have to wait and arrange your appointment for fingerprinting, followed by waiting for another appointment to pick up your card when it’s ready,” he said.

Can getting legal help sort out these issues and speed up the residency process at all?

“Yes, we have a tried and tested system to be able to assist our clients to obtain their TIE cards,” says McMillan. “Our law firm has extensive knowledge to assist residency applications and we speak multiple languages, allowing for the process to go more smoothly,” he adds.

“At our office, we try to devote as much time as needed for the client to fully understand all the options they have, and then, after analysing their situation, we devise the best possible alternative to help,” explains Martínez.

“Yes it definitely speeds things up, not only because foreigners save a lot of time when it comes to knowing what documents to prepare and actually preparing them, but also because we submit all applications online through a platform enabled by the Spanish government, which is just for lawyers,” he adds. “We also know how to get appointments faster, even during these times”.

Echavarria tells us that hiring a lawyer can definitely help because they know all the correct paperwork to provide with each application and exactly what evidence to gather, from lots of experience. “Getting a lawyer can also help avoid rejections and having to go through an appeal,” he explains. “But most lawyers cannot help speed up the actual process once the application has been submitted,” he warns, saying that it will still take four to five months to get the residency card in your hand.