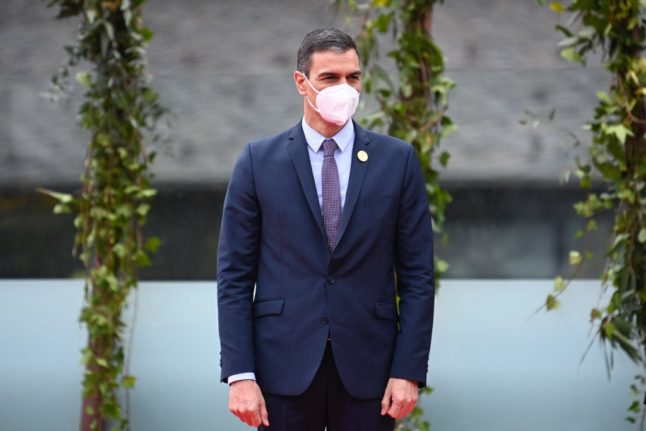 In his busy schedule, does Pedro Sánchez have time to leaf through El País every day over his breakfast?

Once he has had time to get through stories about himself, what his government is or isn’t doing or the cartoons, the Spanish Prime Minister might notice a statistic which always jumps out at me every day – the contagion rate.

On the masthead of the digital edition – what most of us read these days – there is a handy ready-reckoner about which way the Covid-19 pandemic is heading here.

Today, the paper reports that over the past two weeks the number of coronavirus cases have risen by 33.1 percent.

One would have thought that this might be a wake up call for the government as we are just over two weeks away from the end of the state of emergency on May 9th.

Mr Sánchez has said he is standing by his decision, even though some regions like the Basque Country have called for it to be extended.

For the past six months, Spain’s 17 regional governments have had the power to limit citizens’ fundamental rights by introducing night time curfews, restricting the movement of citizens and ordering the closure of businesses – without any possible legal comeback in the courts.

Immunologists and legal experts now fear that without this legal measure, it will leave the regional authorities in a kind of legal limbo which will harm efforts to bring the pandemic under control.

Iñigo Urkullu, the president of the Basque Country, asked Mr Sánchez to extend the state of alarm, saying without this measure regions will be without the “working capacity” or “legal guarantees” to adopt the necessary measures to curb the pandemic.

Mr Urkullu was referring to measures like the night time curfew, restrictions on mobility and bans on social gatherings.

Rafael Bengoa, a former World Health Organisation health systems director and now the co-director of the Institute for the Health and Strategy in Bilbao, said it was an error to plunge Spain into a legal no man’s land.

Since the Easter holiday, cases have been rising. The 14-day coronavirus contagion rate stood at 232 coronavirus cases per 100,000 of population on Thursday, according to data from the Health Ministry. Before the holiday, the figure had fallen to 128 during mid March.

“To end the state of emergency in May with a very high level of Covid-19 is a strategic error. The vaccines are beginning to have an impact but it will not be sufficient by May,” Professor Bengoa told The Local.

“Many countries like Germany and the US are centralising the final stages of pandemic control and vaccination. Plus, with the rise of variants we may still get a nasty surprise.

He added: “In public health terms it is not the moment to weaken the legal base which the regional authorities should have until September.”

The vaccination programme is slowly getting into gear but only 7.9% of the population has had both doses of any vaccine, according to the Health Ministry.

Analysts have suggested that Mr Sánchez has insisted the state of emergency will not be extended but may change his tune once the Madrid regional election is over on May 4.

The reason is the government’s handling of the Covid-19 crisis has become one of the central issues during the election campaign in the Spanish capital.

Isabel Díaz Ayuso, the maverick conservative Madrid president, has defied the left-wing government throughout the pandemic, putting the interests of business first and extending opening hours for bars and restaurants first while health workers have protested over cuts.

However, should the government go ahead and end the state of emergency, and is Spain prepared?

Alex Arenas, a viral immunologist at the University of Rovira i Virgili in Tarragona, Spain, said courts will have to make individual decisions on restrictions or curfews.

“The normal thing would be to finish the state of alarm but this should be accompanied by introducing more controls like rapid and frequent tests for Covid-19 and more tests to identify variants of the virus. But none of this seems to be up and running right now,” he said.