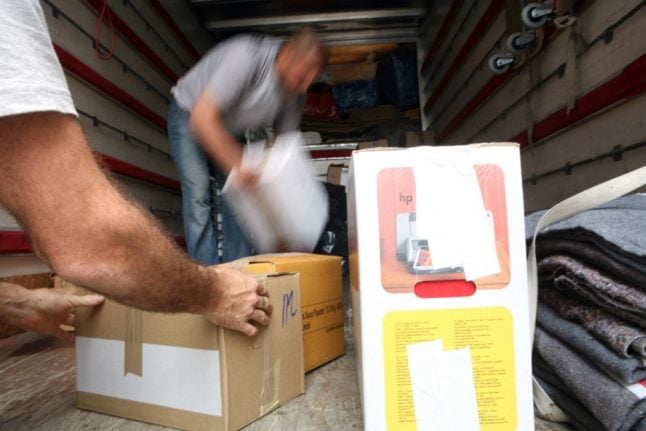 Moving house within the EU is pretty simple – load up a van with stuff and cross freely across borders until you reach your destination.

But since the UK left the EU, bringing any goods from the UK to Spain has become a lot more complicated.

So what’s the deal if you want to move and bring all your possessions over, or you just want to shift some furniture or household items to a second home in Spain?

Well, there are quite a few things to consider.

The following information is taken from Spain’s Agencia Tributaria tax agency, Spanish foreign ministry sources and European law portal EUR-lex. In some cases the information provided by them differs slightly so it may be useful to use a forwarding agent or customs clearance agent in Spain.

Remember as well that the Canary Islands have a different tax regime called IGIC. This article will focus on the duty tax applicable under the IGIC tax laws that apply to the rest of Spain.

This includes all manner of personal property that people are transferring from their normal residence in a non-European country – in this case the UK – to a European country, Spain.

However, Britons are only exempt from these charges if they have been living legally as a resident in Spain for no more than 12 months. After that, Britons bringing in personal goods to their homes in Spain could well be taxed on them.

New British residents in Spain will therefore have a year to bring over without paying duty their furniture, electronics, kitchen appliances and other personal goods, some of which fall under the categories listed below.

According to the latest information published by Spain’s tax agency in March 2021, these belongings should have been owned/used for at least six months before they can be taken to Spain duty-free.

The items can’t be rented, loaned or lent and certain personal belongings may still have to be accredited if Spanish customs requires it.

It is possible for Britons to move their belongings over to Spain before they’ve obtained residency, as long as they commit to staying in Spain for the following six months and that they show proof of the residency process or their registration at a town hall in Spain (padrón).

It is also necessary for them to have lived consecutively for 12 months in a non-EU country for them to be exempt from duty when importing their belongings to Spain.

*Pets: Find out more about the rules for travelling with pets between Spain and the UK here.

Imported goods after marriage: goods imported to Spain after a couple gets married, provided that the person concerned has resided outside the EU for at least 12 consecutive months and can prove that they have been married.

Inherited goods: Personal belongings inherited by people residing in Spain and the EU

Study or work goods: equipment needed to carry out a trade, study material and other furniture for students who come to study in the EU.

Vehicles: bikes, motorcycles, cars and other vehicles such as boats and their add-ons that are meant for private use. “The time given for the exemption of VAT on vehicles is 12 months,” writes Spain’s tax agency, suggesting that even those who have been resident in Spain for more than a year may still import their vehicle duty free until the end of the 2021, marking 12 months since the UK left the EU. Find out more about importing a vehicle here. The key step-by-step guide for importing a car into Spain

When do Britons moving belongings to Spain need to pay duty?

As explained above, if the UK national has resided in Spain for over a year, they may have to pay duty on personal belongings such as furniture or appliances.

In this case, the item’s value may be the determining factor and it cannot be of a commercial nature.

Then there are the limits on consumables such as alcohol and tobacco Britons were no doubt familiar with already, but new rules apply to them as non-EU citizens.

According to Spain’s leading airport operator AENA, “some goods and products are subject to specific regulations (total value, quantity, etc.) when entering or leaving Spain on flights with third countries, Ceuta, Melilla and the Canary Islands”.

In principle, there is no limit to the amount of tobacco that you can transport to Spain, as long as it is for personal use. However, if the tobacco exceeds the following amounts, you must declare it at customs upon arrival and pay import duties, VAT and excise duties, or the authorities may confiscate them:

Similarly, if you transport alcoholic beverages from Spain to the UK above the following amounts, you will have to declare it at Spanish customs and pay import duties or the authorities may confiscate them.

Any combination of the above can be brought in by Britons arriving in Spain as long as their individual limits aren’t surpassed.

Products such as meat and meat-based foods, dairy produce, vegetables, plants, seeds and certain medications may not be subject to duty but that’s because they are now banned for Britons entering Spain as non-EU citizens. Find out more here.