Onlookers are expected to return to Madrid’s Las Ventas bullring in May, for the first time since Spain was hit by the pandemic.

Nearly all of the country’s bullrings and squares have been closed during lockdown restrictions – a move which has both sent matadors into financial disaster and sparked relief from animal rights campaigners, who believe the practice is cruel and should be banned.

Las Ventas, one of the world’s most famous bullrings, will open its doors to a maximum of 4,000 spectators on May 2nd.

This means that the event will still observe distancing rules, as the crowd amounts to just 40% of the venue’s capacity. Other Covid-19 prevention measures, such as wearing face masks, will also be mandatory.

Major bullfighting events were cancelled in 2020, including Pamplona’s San Fermin festival in July. This saw many bulls being sent straight to the abattoir.

Spain’s tradition of bullfighting remains controversial – is it an inherent part of culture that contributes to the Spanish economy or animal cruelty?

An online poll by Ipsos MORI, for World Animal Protection, revealed that 19% of adults in Spain aged 16-65 said they supported bullfighting – while 58% opposed it.

The economically-hit profession of matadors forms part of a wider financial crisis in Spain. The government lowered its GDP forecast for 2021 in April, following continued lockdown restrictions putting a dent in the country’s economic recovery.

Seven deaths occurred in the eastern Valencia region where the practice of releasing bulls into the streets for entertainment has sparked debate, with the other fatalities taking place in the regions of Madrid, Castilla y Leon and Navarra in the north.

This year’s toll raises to more than 30 the total number of people who have been killed in Valencia’s bull-running events since 2015.

This summer’s victims, who died from injuries sustained while racing through the streets alongside a group of hefty bulls — known as “bous al carrer” in Valencian — were between the ages of 18 and 73.

Six of them were men and one was a woman — a French woman who was the oldest victim.

They died after being gored or trampled by the bulls. Countless other people were injured, among them minors.

Bull-running events are a highlight of summer festivities across Spain, with the best known being the San Fermín festival in the northern city of Pamplona.

The idea is that a small group of bulls are let loose into a fenced-off area of the streets and hundreds of foolhardy thrill-seekers run alongside them for a few adrenaline-fuelled minutes, in a spectacle that draws thousands of spectators.

In Valencia and in southern parts of neighbouring Catalonia, such events are hugely popular and few are the villages that don’t put on some sort of entertainment involving bulls barrelling through the streets.

There are also “bous a la mar” – races to the seafront where at the end of the run, the participants vie to try and make the bulls fall into the water, most ending up there themselves.

Experts are divided about when the practice of running the bulls began but Cuéllar, a town some 150 kilometres (90 miles) north of Madrid, claims to have historical records dating back to the 13th century.

READ ALSO: Will bullfighting ever be banned in Spain?

And although the exact origin of the tradition is unclear, it is thought to emerged out of the need to bring bulls from the countryside into the towns on market day when they would be be coralled through the streets with sticks.

Irrespective of how it began, it has become a political hot potato for the local authorities, which often sparks heated debate and can win or lose an election.

When the Socialists and their hard-left ally Podemos managed to take over Valencia’s regional government in 2015, ousting the right-wing Popular Party, they were careful to steer well clear of the issue.

Podemos, which in Valencia is known as Compromís, is implacably opposed to any entertainment involving bulls.

“It’s not a simple issue, whether you’re debating or legislating… there are many sensitivities,” Valencia’s regional deputy leader Aitana Mas told reporters.

“At some point, it’s a debate which we have to have,” said Mas of the Compromís party, referring to a ban on all such activities.

“We’re talking about seven lives this summer alone,” she said, but adding it was also necessary to talk about “protecting animals”. 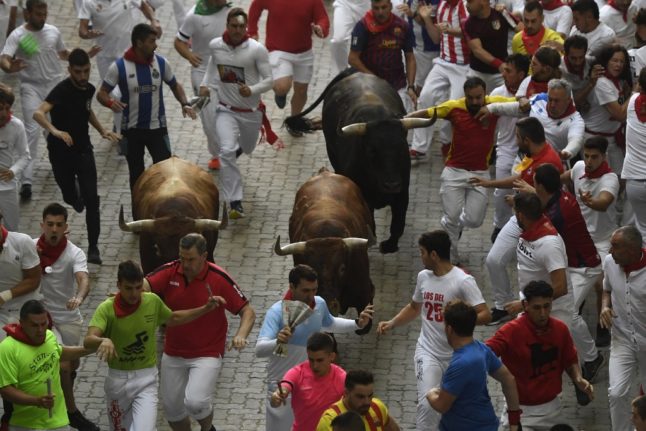 Bull-running events are a highlight of summer festivities across Spain, with the best known being the San Fermín festival in the northern city of Pamplona. (Photo by MIGUEL RIOPA / AFP)

But Germán Zaragoza, head of the region’s Federation of Bull-Fighting Clubs which promotes bull-running events as the Spain’s “most-traditional and authentic” fiestas, says any such move would face an uphill battle.

“They will have to take on Valencia’s love for the ‘bous al carrer’,” he said.

“The right to access culture — and all events featuring bulls are absolutely part of that — is sacred within the constitution,” he said in a statement.

“And neither the city councils nor the regions have the authority to ban or organise a referendum” on the fate of such events.

The right-wing Popular Party, which has a long history of supporting any bull-related festivities, pledged its support for such traditional events.

Those who question the validity of such fiestas “are attacking who we are and how we express our traditions and culture”, said Marta Barrachina, a local PP leader in Valencia.

But not all areas of Valencia feel the same, with towns like Sueca or Tavernes de la Valldigna refusing to issue permits for bull-running events this year.

And animal welfare associations have published a manifesto calling for a ban on change.org which describes bull-running events as “torture dressed up as culture and tradition” in which “abuse is more than evident”.

Such spectacles often involve “these noble animals” being beaten with sticks, kicked, jerked around, insulted, humiliated and subjected to stress, it states.

And the runners “are often drunk or under the influence of drugs, with many also injured”.

So far, the petition has garnered some 5,500 signatures.