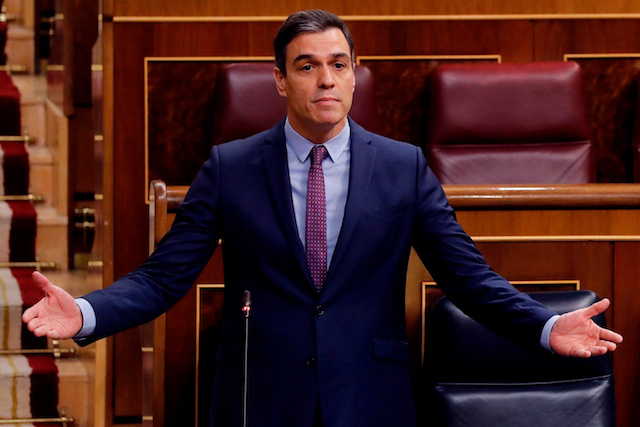 Activated in October, the state of alarm allows the central and regional governments to adopt measures that curb individual freedoms, such as imposing curfews and closing regional borders to anyone moving without just cause. It is due to expire on May 9th.

Socialist Prime Minister Pedro Sánchez has said his government does not intend to prolong it, arguing the regional authorities have “sufficient tools” to tackle the crisis and that a vaccine was now available.

“The circumstances are different,” he said during a debate in parliament on Wednesday. “The alternative to a state of emergency is a vaccination programme, which is intensifying.”

When it was declared in October, Spain was in a “serious” situation with a 14-day incident rate of 362 cases per 100,000 inhabitants, he said.

Now, although the daily caseload has been rising, that rate stands at around 200.

But many regional governments – which are responsible for health care – fear that lifting it will throw them into a legal limbo that will hurt efforts to control the spread of Covid-19 and are pushing for an extension.

Inigo Urkullu, head of the northern Basque Country region, has warned it would remove the “legal guarantees” for imposing measures like restrictions on mobility.

Regions popular with domestic tourists are especially worried about losing the ability to ban travel in and out of their territory, fearing an influx of visitors from areas with higher infection rates, once the emergency ends.

READ ALSO: The regions of Spain where restrictions are likely to remain after the state of alarm

An initial state of emergency was declared when the pandemic first broke out, which lasted until mid-June when authority for managing the pandemic was handed to Spain’s 17 regions.

Extending the measure would require parliamentary approval in the 350-seat chamber where Sánchez’s left-wing coalition holds a minority, forcing him into a new round of political negotiation.

But as time went on, the courts began overturning certain measures such as partial lockdowns in certain areas, or limiting the numbers of visitors at home.

Deputy Prime Minister Carmen Calvo on Thursday insisted that “99 percent” of the time, the courts had backed measures taken by the regions.

“Aside from confining people to their homes, almost everything else is possible under existing health laws,” she said.

Adding to the pressure, Spain like other EU nations is facing delays to its vaccine rollout due to concerns the Janssen and AstraZeneca jabs could cause blood clots.

Johnson & Johnson on Tuesday said it would delay the European rollout of its Janssen vaccine while Spain has limited AstraZeneca to people aged between 60-69.

But the government has continued to insist it will meet its target of vaccinating 70 percent of Spain’s population by the end of August.

The country has already immunised those most at risk of dying from Covid so the mortality rate from the pandemic is now lower, said Guillem Lopez-Casasnovas, an expert on healthcare systems at Barcelona’s Pompeu Fabra University.

“I agree that the state of emergency can be lifted unless the situation gets a lot worse due to a new variant of the virus,” he told AFP.

So far some 3.2 million people in Spain have been fully vaccinated, mainly residents and workers in nursing homes and older people who were given priority. More than 76,000 people have died in Spain from Covid-19.

Salvador Macip, a health sciences expert at Catalonia’s Open University, disagrees, arguing it is too soon to end the state of emergency since “vaccination is still not at the point where we can feel safe”.

“I think it is a bit dangerous, I don’t think it is justifiable epidemiologically,” he told AFP.