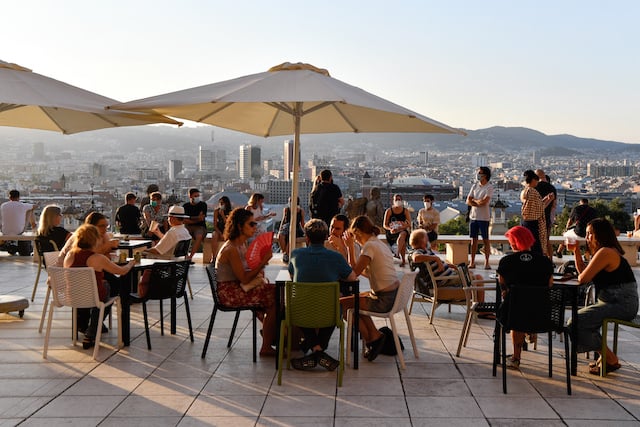 “The Government’s objective is that once the period of the state of alarm has expired, on May 9th, it will not be necessary to extend it further,” Prime Minister Sánchez told a press conference in La Moncloa, adding that “currently we are approaching the end of this nightmare”.

Under the state of alarm, which has been imposed for the last six months since October 2020, Spain’s central government, and in particular the Interior Ministry, held all powers, including over the country’s security forces as well as local and regional police forces.

READ ALSO: How the end of Spain’s state of alarm in May could affect you

This could mean an end to curfews, border closures and limits on social gatherings. A group of experts told Europa Press that it is likely we could still see perimeter closures, but that they would probably be at the level of health zones and neighborhoods rather than entire autonomous community closures.

But how have Spain’s autonomous communities reacted to the confirmation that the state of alarm will end on May 9th and in which regions are restrictions likely to remain beyond this date?

Initially, The Basque Country, Castilla La-Mancha, Andalusia and Murcia were all opposed to ending the state of alarm in May and asked Sánchez to extend the state of alarm further, allowing them to continue making rules on restrictions without having to get permission from a regional court.

However, since then Castilla La-Mancha, along with La Rioja and Valencia have all said that their regional borders would reopen and are adapting to the situation.

The president of the Basque Country, Inigo Urkullo was one of the most outspoken against the end of the state of alarm on May 9th. On April 12th, Urkullo urged Sanchez to extend the emergency, saying without it he would lack the legal means to impose restrictions. He said it is “a very delicate situation” and that he is “concerned about how this decision will play out”.

The president of the region of Murcia, Fernando Lopez Miras agreed, saying that “there is enormous insecurity” and that they are “without legal support” to make decisions in the face of the pandemic.

Galicia, the Valencian Community, Cantabria and Castilla y León also showed their reservations about not extending the state of alarm.

Extremadura, Aragón, Asturias and Navarra stand with Sánchez however and agree that ending the state of alarm is a positive thing. The governments of these regions have said that it’s not possible to live eternally in a state of alarm and that putting an end to it is just and necessary, taking into account current data and the vaccination schedule.

Government spokesman of Navarra, Javier Remírez insisted that the autonomous community has “the necessary instruments” to be able to take measures to deal with Covid-19 when the state of alarm is lifted. The government of Andalusia has expressed some concerns about the end of the state of alarm and insisted that Sánchez must provide a legal framework for autonomous communities to make restrictions after May 9th. “On Monday the curfew ends and we cannot close beaches with very high contagion rates because the state of alarm is finished and the communities are tied up,” said President of the Junta of Andalucia, Juanma Moreno during a press conference in Granada on Friday, April 30th.

The Minister of Health of the Junta de Andalucía, Jesús Aguirre has indicated that some restrictions within the region will remain, most likely to do with mobility and capacity. “Some health areas will be at extreme risk, which will mean changing the level of alerts and measures such as municipal closures and capacity limitations,” he said.

The President of the Generalitat de Valencia Ximo Puig proposed on Monday, May 3rd that the perimeter closure of the Valencian Community should be lifted. However, he stressed that just because the state of alarm is ending, it doesn’t mean we will return to normality. In a press conference, Puig said that people should not have “false expectations” that all the restrictions will suddenly end.

It is expected that the nightly curfew in Catalonia will finally be lifted after May 9th, allowing Catalans to leave their homes after 10pm for the first time since October 2020. Government spokesperson, Meritxell Budó, said that “no additional measures will be needed after May 9th, if Covid transmissions remain under control”. When asked in an interview on Ràdio4 and La2 about whether the perimeter confinement will be lifted, she replied that “it still has to be evaluated”. The Catalan Government will meet on Tuesday, May 4th to address the situation and pass new legislation so that, if necessary, the Generalitat can reactivate some of the restrictions that are due to expire.

According to Diario de Mallorca, the government of the Balearic islands is already working on ways it will be able to implement restrictions beyond next May 9th. The president of the Balearics, Francina Armengol, said on April 8th that the Balearic Islands need “all the legal tools” to establish restrictions in the face of the pandemic, including the possibility of resorting to the curfew, which she called a “fundamental measure”.

At a press conference following a cabinet meeting on Monday, May 3rd, Balearic government spokesperson Iago Negueruela said: “Of course there will be restrictions” after the state of alarm ends on May 9th. It is thought that measures such as restrictions on bar and restaurant opening hours, capacity and the nightly curfew will remain in place, but Negueruela said that the government, business, and union representatives will meet this week to decide.

Initially, the Canarian president, Ángel Víctor Torres, welcomed the news of the ending of the state of alarm. “Everything will evolve according to social, individual and collective responsibility,” he said.

However, on April 29th, Canary Island Government spokesman Julio Pérez, said that the idea is to maintain as many restrictions as possible when the state of alarm ends on May 9th, because the archipelago has to be “an attractive tourist destination”.

Madrid has enjoyed some of the most relaxed restrictions in the country with regards to curfews and the opening hours of bars and restaurants, and it is expected that this won’t change when the state of alarm ends. The Madrid elections on May 4th however, may decide on how the community will move forward.

Galicia’s Popular Party regional president Alberto Núñez Feijóo criticised Sánchez and his left-wing government saying: “We are left without legal coverage or legislation in the face of the pandemic”. He showed concern about the lack of alternative plans after the end of the state of alarm. It is still unclear which measures will remain in Galicia after May 9th, but the Xunta de Galicia is currently working on ways it will be able to extend restrictions.

The Government of Castilla-La Mancha has also said that it will not maintain the perimeter closure of the community from May 9th, but will continue with other restrictions such as the use of the masks and the curfew. On Monday, May 3rd, the president of Castilla-La Mancha, Emiliano García-Page said: “We continue to believe in the use of the mask, the curfew, and other effective measures in this time of transition to universal vaccination,” he said. García-Page also stressed that there must be a balance between the restrictions and opening up completely back to normal life “We don’t want to go from one hundred to zero, or from zero to one hundred,” he explained.

La Rioja will abolish both the curfew and the perimeter border closures after the state of alarm. On Monday, May 2nd President of the regional government Concha Andreu explained that a new traffic light system would be implemented to impose different restrictions if necessary. However, she said that the details of this new plan would not be revealed until later on in the week.