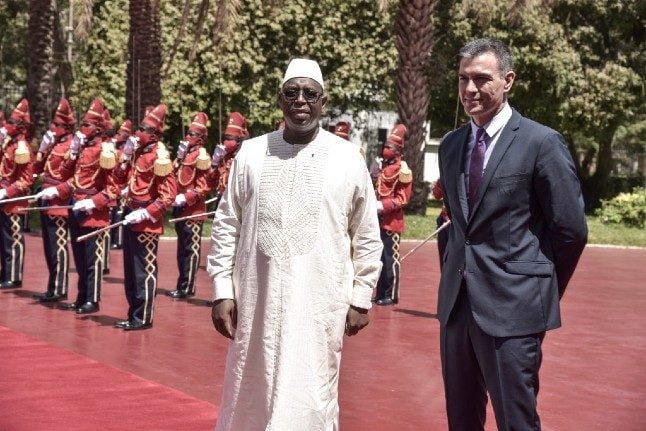 Senegal’s Atlantic coast sees thousands of migrants leave each year, risking their lives in a bid to reach Europe aboard rickety boats.

Many of them arrive in the Canaries, the Spanish archipelago and gateway to the European Union that has been overwhelmed by the influx.
“Senegal is an essential partner in the management of the Atlantic route with regard to emigration,” Sanchez told a joint press conference with
Senegalese President Macky Sall.

The two countries have been cooperating for years and Spanish forces are deployed to the port of Dakar. Sanchez hailed what he called “extraordinary collaboration”, but Spain would like to see Senegal resume repatriation flights for illegal migrants, frozen since 2018. The two leaders indicated that the subject had been discussed, but did not provide further details.

The emigration of thousands of young people due to lack of employment is also a major domestic political issue in Senegal. The government faced heavy criticism in late 2020 after the death of dozens of migrants at sea.

“The solution for Africa is not to see our children die at the bottom of the ocean … Our policy is to provide prospects,” said Sall. He insisted on the need to retain young people by creating jobs, and Sanchez’s visit included a heavy dose of economic discussions.

Sanchez is in search of new markets for a Spanish economy severely hit by the pandemic and he was accompanied by a list of business leaders.

Senegal, already coping with poverty before being hit by the pandemic, is seeking partnerships and private investment “because that is what will create more shared growth and prosperity,” Sall said.

In the cultural field, he reported the opening this year in Dakar of the headquarters of the first Cervantes cultural institute in sub-Saharan Africa.