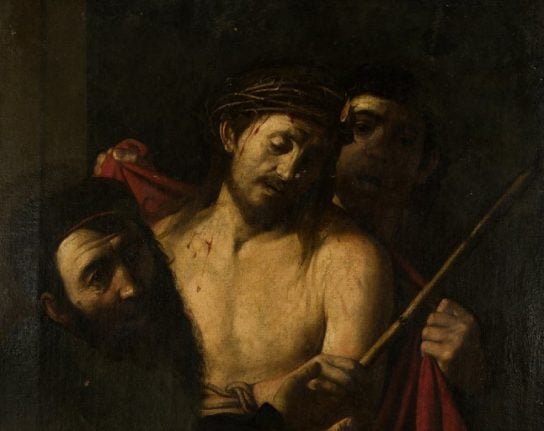 The painting had been due to go under the hammer on Thursday with a starting price of just 1,500 euros until it was abruptly withdrawn from auction by Spain’s government on suspicion it was actually painted by Caravaggio.

Sitting in a cafe in the Spanish capital, this Italian art history specialist told AFP what caused her to jump on a plane from Rome to Madrid for what she’s dubbed “Operation Caravaggio”.

Entitled “Coronation with Thorns”, the dark and atmospheric canvas shows a bloodied Jesus just before his crucifixion with the work attributed to “the entourage of (Spanish artist) Jose de Ribera”.

“I saw a picture of the painting in a Whatsapp message sent by some antique dealer friends who immediately realised it could be very important and wanted to know what I thought,” said Terzaghi, an expert on Caravaggio who lectures at Roma Tre University.

At first, she thought it was by Battistello, one of Caravaggio’s followers but in the end concluded it was “by the master himself”. “But I couldn’t say for sure without seeing it,” she told AFP.

And that was when she got a call from Madrid’s Prado Museum asking her opinion as an expert on the master of ‘chiaroscuro’, an oil technique
involving strong contrasts between dark and light to create three-dimensional figures with dramatic effect.

Landing in Madrid on Wednesday, she saw the painting at the auction house the day before the sale.

“I had no doubt.. it was clear it was a work by Caravaggio,” she said, admitting she was reassured other Prado experts agreed and hailing the government’s declaration of an export ban as “the most important outcome”.

The decision was taken by Spain’s culture ministry after the Prado confirmed it had “sufficient documentary and stylistic evidence to consider that the painting… may be an original work by Caravaggio”.

‘Not an exact science’

For her, the evidence was ample: from “the head of Christ” to the glow of his torso, the colour of his cloak and “the three-dimensional nature of the three figures, who are offset in a transition that is almost cinematic”.

As is the case with any painting attributed to a great master, experts in the art world are often divided.

Speaking to AFP on Thursday, Eric Turquin, an old masters’ specialist whose expertise is recognised by French auction houses, said he was “not convinced at all by the photo” he’d seen of it.

“I don’t see Caravaggio’s hand in this painting. The subject matter is certainly Caravaggio, and it was probably painted between 1600 and 1620 by a good painter, but not Caravaggio.”

Work to identify the canvas “will last as long as necessary” and all the relevant experts would obviously be involved in order “to obtain a result which is as close as possible to the truth”, Terzaghi said.

“Attributing (a painting) is a very personal thing, it is not an exact science and as such everyone has a different opinion,” she said. “But each opinion helps us understand something more about the painting.”