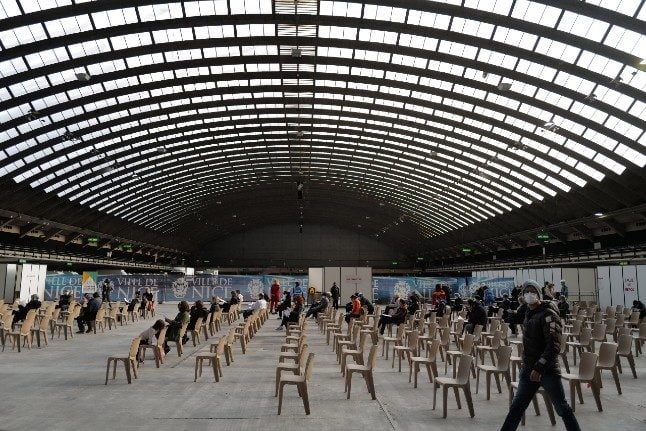 European countries’ vaccination campaigns started at a snail’s pace and have come in for huge criticism domestically and from abroad but the pace is certainly picking up.

Germany on Wednesday administered a record 656,000 doses, according to the Robert Koch Institute (RKI), not too far off the UK’s daily record of 844,000 injections. On Thursday Germany topped 700,000 jabs.

Then France on Thursday announced that it had met its target of giving at least one Covid vaccine injection to 10 million people, one week ahead of schedule, while also setting a daily record of 437,000 vaccinations.

Vaccination efforts have also picked up in Spain. The country’s health authorities beat the record for daily administered doses with 336,846 on Wednesday April 7th and then 456,682 the following day. But there have been problems in Italy, where targets have been missed.

March and April have also seen other countries covered by The Local’s network catch up with Denmark — by far the fastest European Union country off the block in January and February — as constraints in vaccine supply became a more important limiting factor than efficiency in administering doses.

READ ALSO: How is Spain’s vaccination campaign going in April?

By the start of April, the nine countries covered by The Local were closely bunched together in terms of the number of doses administered by 100 people, with the leader Denmark on 19.77, and the laggard, Sweden, on 16.55.

The chart below shows the total number of doses administered, adding up both first and second jabs.

According to Denmark’s infectious diseases agency SSI, 835, 271 people had received at least one dose on April 8th (14.3%), while according to the Norwegian Institute of Public Health, 835,970 people (15.7 percent) had been.

In this chart, you can see how other countries have steadily caught up with the lead set by Denmark, except perhaps Sweden.

What’s behind the increased speed of vaccination?

This week around 35,000 GP surgeries in Germany have started vaccinating patients across the states, helping to increase the speed of the inoculation campaign. This boost will increase in the week of April 26th when the number of doses available to GPs will more than triple to three million a week.

France, meanwhile, has recently opened around 30 giant mass-vaccination centres or “vaccinodromes” in exhibition halls, stadiums, and other large venues,  with the Groupama stadium in Lyon carrying out 10,000 vaccinations over the Easter weekend alone.

Otherwise, the faster pace largely reflects increased vaccine deliveries as well as the fact that governments have opened vaccination programmes up to wider age groups after priority groups such as care home residents were almost all vaccinated.

Mind the gap: how long are countries leaving between doses?

France’s decision to allow a relatively long 12-week gap between doses for the AstraZeneca vaccine, and 3-6 weeks between doses for Pfizer and Moderna, has enabled it to overtake Denmark when it comes to the share of the population. Germany’s Permanent Vaccination Commission on March 4th recommended extending the gap between the first and second AstraZeneca dose to a maximum of 12 weeks.

Austria has also pulled ahead, with close to 15 percent of the population having received at least one dose, thanks in part to a March 24th recommendation from the National Vaccination Board to extend the gap between doses for both the Pfizer/BioNtech and Moderna vaccine by “two to three weeks”, so that the second dose is given at six-week intervals.

France, meanwhile, has by far the lowest proportion of its population fully vaccinated of any country in The Local’s network.

How significant an impact has the pause in administering AstraZeneca jabs had?

The effects of the temporary suspension of AstraZeneca vaccines is clear if you look at a chart of the seven-day average of daily doses given per 100,000 people between March 11th, when Denmark suspended use of the AstraZeneca jab, and April 8th, when Denmark and Norway are the only countries in The Local’s network yet to resume using it.

Austria, which only temporarily suspended the use of one suspect batch of the vaccine, surged ahead from March 12th, while Denmark dropped from its leading position to temporarily become the slowest vaccinating country covered by The Local.

After Germany, France, Italy, and Spain resume AstraZeneca vaccinations on March 19th, they started to pull ahead of Denmark, Sweden and Norway, which kept the suspension in place while health authorities further studied the evidence. Last week, Norway and Denmark, administered the lowest number of doses of any country covered by The Local.

Switzerland, meanwhile, whose medicines agency has yet to approve the AstraZeneca vaccine, continued along the same lacklustre trajectory.

Who has done the best at protecting the most vulnerable risk groups?

Of all the country’s in The Local’s network, Italy has prioritised health workers the most, with over 90 percent of health workers having had at least one dose of a vaccine, compared to less than 60 percent of those over the age of 80.

Most other countries have prioritised the over-80s.

According to France’s VaccinTracker website, 63 percent of those over the age of 75 have had at least one dose of a vaccine, of whom 34 percent have had both doses.

Germany’s vaccination dashboard on March 31st stopped updating data on what share of vaccines had been given to health workers and which to elderly. But at that point 48.8 percent of the total doses had been to people prioritised due to age, of whom 12.7 percent were care home residents, and 39.9 percent to health staff.