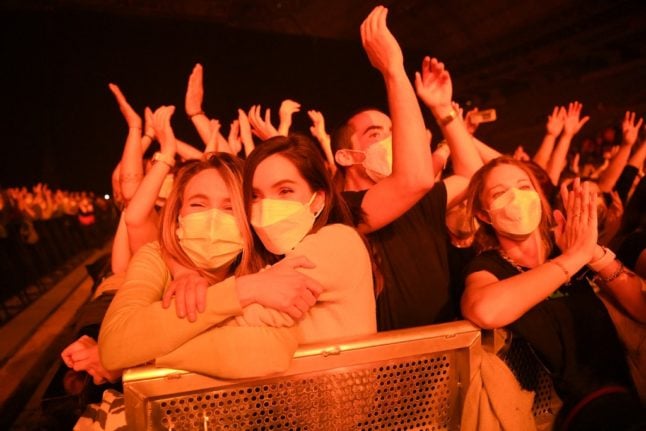 Attendees underwent Covid-19 Rapid Antigen Tests and are required to wear face masks but the social distancing rule will not be complied as part of a study on virus propagation. Photo: LLUIS GENE/AFP

“This is for one night only, so enjoy it,” said a presenter at Saint Jordi Arena just minutes before the start of the gig by one of Spain’s most popular bands, indie rockers Love of Lesbian.

Ahead of the party, everyone underwent mass screening and antigen tests, donning FPP2 surgical masks to attend the gig which comes after an unprecedented year of confinement, social distancing and very little social interaction.

“I’m so very, very excited. It’s been 18 months since we’ve been on stage and one of us up here is in tears!” shouted lead singer Santi Balmes after the first song which was appropriately called “Nobody in the streets”.

And his euphoria was shared by the audience.

“It’s incredible, so exciting. We’d forgotten what it was like to be around other people, it’s as if it was my first-ever gig,” said Jordi Sanz who like everyone was in the mosh pit in front of the stage as all stands were left empty.

“We really wanted to do something different, to take a step towards normality,” said Marina Crespo, 25, who in spite of the security measures was trying “not get too close to people, to keep a bit of distance”.

Even so, the atmosphere was like travelling back to a time before the pandemic with excited crowds dancing, hugging each other and belting out songs at the top of their voices, or just drinking beers at the bar.

Behind the event is a group of music and festival promoters as well as a local hospital who say the safety measures, which include a special ventilation system, make it a safer space than inside a private home.

During the morning, the dance floors at three long-closed Barcelona nightclubs were transformed into makeshift field hospitals with nurses in blue carrying out antigen tests inside white canvas enclosures — and the results back in 10 minutes.

When a person tested negative, the entry pass downloaded on an app on their phone was validated. The only other requirement was that they wear an FPP2 mask while inside the venue.

“We expect it to be completely safe. Over the next 14 days we will look at how many of the audience test positive for Covid and will report back,” explained Josep Maria Llibre, a doctor at the Germans Trias i Pujol hospital just north of Barcelona.

Light at the end of the tunnel

The aim is “to discover a way in which we can coexist with Covid and hold concerts which are completely safe,” said Ventura Barba, executive director of Barcelona’s Sonar festival which is one of the organisers.

“We hope it will be a turning point,” he told AFP.

This week, Sonar said its hugely popular electronic and dance music festival would be cancelled for the second year running because of the Covid crisis.

“The pandemic has been a nightmare for everyone, but for the music industry in particular,” he said.

According to a study published by Spain’s Music Federation, the European music industry lost 76 percent of its earnings in 2020.

For Love of Lesbian’s lead singer, Saturday’s gig was aimed at showing those in the music industry there was a way forward.

“It is creating a hole in the tunnel so the world of culture can see some light, or at least a possible way of doing things,” Balmes told AFP.

Although the pandemic forced the band to delay the release of their latest album by eight months, they feel luckier than most, given that many musicians  are “having a really bad time and even taking food parcels because they’ve got no income”.

The tickets for Saturday’s concert sold out within just a few hours.

“It was a real buzz but it’s logical: we’ve been living in a time of restraint and everyone’s had their handbrake on,” he said.

“We all need to let off a bit of steam and get back to our old lives.”