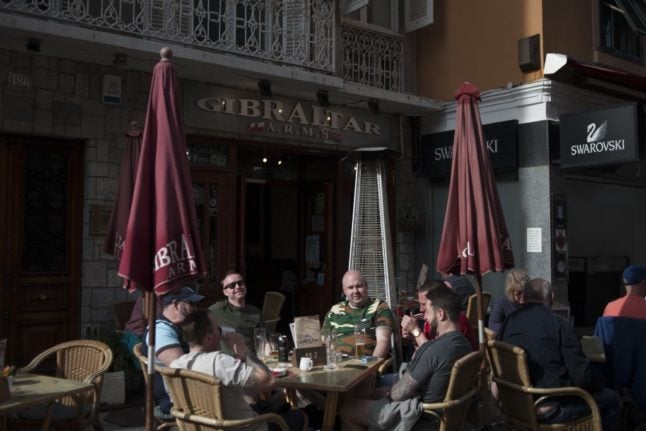 Bars and restaurants in Gibraltar are now open un til 2am, the curfew has been eliminated and mask-wearing mandates are soon to be eased to cover only indoor spaces and public transport. Photo: JORGE GUERRERO / AFP

Dubbed “Operation Freedom”, Gibraltar’s vaccination campaign is among the fastest in Europe.

Gibraltar’s health authorities have administered at least 57,646 doses to its citizens, which means about 85.5% of the country’s population has been fully vaccinated.

The small British overseas territory will have offered a jab to every resident over 16 within the next two weeks – and two doses by mid-Apri, health minister Samantha Sacramento told Politico.

This differs from the UK, where only over-18s can get the jab.

The vaccination campaign has also been extended to more than 10,000 workers in Spain who regularly cross the border into Gibraltar.

Bars and restaurants are now open until 2am, the curfew has been eliminated and mask-wearing mandates are soon to be eased to cover only indoor spaces and public transport.

The number of Covid-19 cases has fallen to 15, and there are zero Covid-19 patients in hospital.

The territory’s fast vaccine campaign was thanks to a small population and the uninterrupted supply of vaccines, mostly those manufactured by Pfizer/BioNTech, that have been sent from the UK since early January.

The regular shipments stand in stark contrast to the situation in the rest of Europe, where the vaccine rollout has remained slow compared to those in the UK and the US.

Gibraltar is serving as a real-time case study of what having a fully vaccinated population will look like.

Mass events will resume in the coming weeks at 30% capacity, but attendees will be limited to those who have received two doses of the vaccine, and will have to show a negative Covid test.

In a territory with a small but densely packed population, with frequent movement of people over the border, the coronavirus was particularly dangerous. Covid-19 infected 4,000 of its 33,000 residents, killing 93.