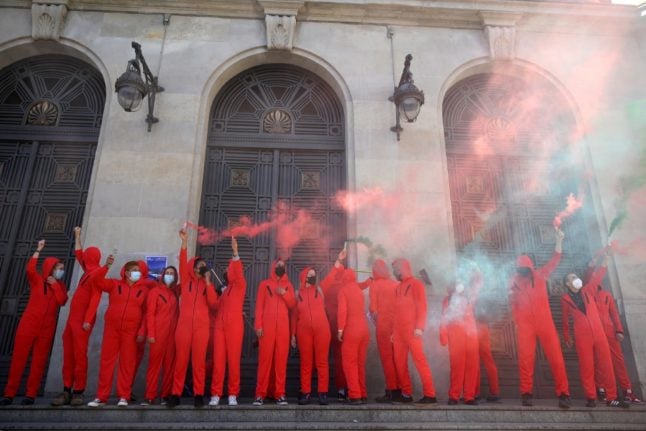 They would like to see rents regulated at a price that suits those living in each area and for tenants to be better protected from evictions, RTVE reported.

There are more than 32,000 people in Spain who do not have a fixed address, 12 million people at risk of social exclusion and there were more than a million evictions between 2008 and 2020, the protesters in Madrid said.

Trade unions and activists joined at the Puerta del Sol in Madrid before marching towards the Spanish parliament, the Congreso de los Diputados.

In Barcelona, the Guàrdia Urbana said 500 people gathered to demand price-regulated house rentals. In protests organised by trade unions, demonstrators called for guarantees to the right to decent housing, and increases in the supply of public housing, among other demands.

Some activists in Barcelona dressed in outfits similar to those used in Casa de Papel, or Money Heist, the Spanish Netflix series about a bank robbery, and released flares in the city.

Protests across the country followed a PSOE proposal to reject limits on maximum rents but instead to modulate taxes to encourage lower prices.

Unidas Podemos threatened to walk out of their coalition with Pedro Sánchez’s ruling socialist party over the decision, describing a rental cap as a “non-negotiable red line”. Allies of the government, like the left wing Catalan party, Esquerra Republicana Catalana have also criticised PSOE’s decision.

The agreement signed between PSOE and Unidas Podemos when they formed a government in January 2020 included a commitment to put a stop to abusive rises in rental prices, El País reported on Friday.