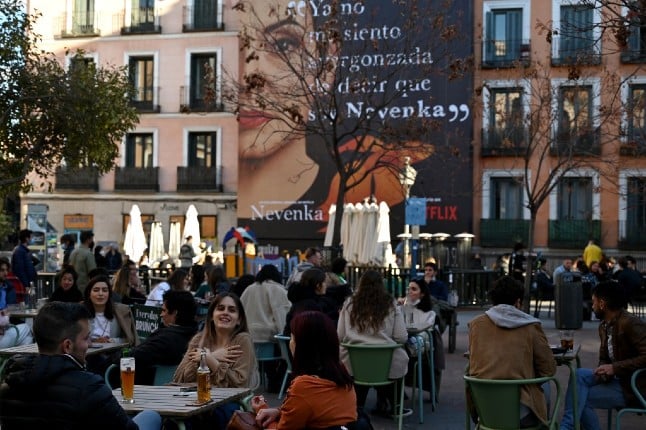 People in Madrid enjoy an evening out in a city courtyard. Photo: Gabriel Bouys/AFP

Judges at the top court in the Madrid region agreed to hold urgent deliberations over the next two days with the aim of reaching a decision by the end of the weekend.

On Wednesday, in a surprise move, the leader of Madrid’s regional government Isabel Diaz Ayuso announced her resignation, calling early elections after breaking an alliance between her rightwing Popular Party (PP) and the smaller centre-right Ciudadanos.

She said the move aimed at avoiding a possible no-confidence motion backed by Ciudadanos, which earlier in the day had broken its coalition deal with the PP in another region of Spain.

She also signed an order dissolving the regional parliament. Simultaneously the opposition Socialists and the tiny leftist Mas Madrid managed to file just such a motion, setting the scene for a vote that could topple her.

The regional parliament cannot be dissolved if a no-confidence motion has been tabled.

On Friday, the dispute was brought before the region’s top court which must now decide whether or not the elections can go ahead.

The court had been due to reach a decision by Tuesday but said late Friday it had agreed “to urgently convene on Saturday and Sunday to examine and resolve” the matter.

Diaz Ayuso’s announcement came just hours after Ciudadanos broke its coalition deal with the PP in the southeastern Murcia region, in order to back a no-confidence motion filed by the Socialists, who dominate Spain’s central government.

Diaz Ayuso, a rising star of the PP who has led opposition to the central government’s pandemic restrictions, said the snap polls would allow voters to choose “between Socialism and freedom”.

Aside from Madrid and Murcia, the PP and Ciudadanos have coalition agreements in two more of Spain’s 17 regions and in several municipalities, raising questions as to whether these alliances will survive.

The shake-up in the right comes as both parties face mounting competition from far-right upstart Vox, which surged past both in Catalonia’s regional election in February.

But if Sanchez pushes “for stronger cooperation with Ciudadanos” it could stoke “renewed tensions within the ruling coalition” as Podemos fiercely opposes many of Ciudadanos’ policies.