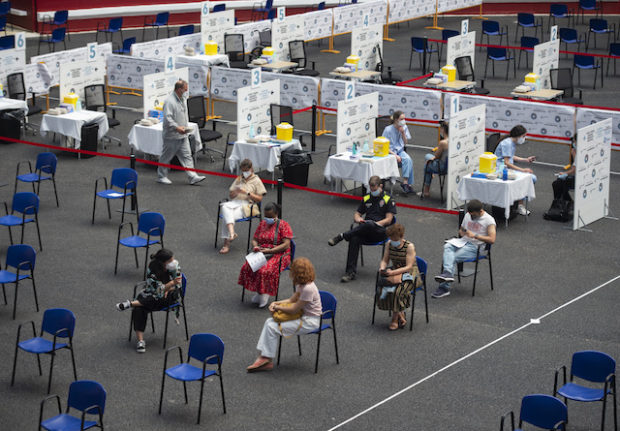 How is Spain’s vaccine campaign going in June 2021?

Almost six months into its vaccine campaign, Spain continues to pick up the pace of inoculation, setting yet another new record on June 10th with 624,261 people vaccinated in one day.

The country is also set to receive 13 million Pfizer vaccine doses this month and the Johnson & Johnson single-dose inoculation has been extended to also include those aged from 40-59.

Some regions have even announced when they will be vaccinating those in their 30s.

On June 15th, Spain’s national and regional health authorities approved the inclusion of three more age groups under 40 years in the country’s vaccine strategy – those aged between 30 to 39 years old, those between 20 and 29 years old, and those between ages 12 and 19.

In this sense, Spain seems to have put most of its vaccine holdups behind it, allowing for a more systematic and faster rollout, after delivery problems and temporary suspensions over side effect concerns prevented the campaign from reaching initial targets. 12.8 million people (around 27 percent of the population) had received the full Covid-19 inoculation by Sunday June 13th, and 21.4 million (45.8 percent) had received at least one dose.

In May some regions had already started vaccinating those aged 50 to 59 and in June vaccination of this age group will continue. Most regions have now also opened up vaccine appointments for those aged 40 to 49.

At the end of May, the Canary Islands decided to open up vaccine appointments to all adults, regardless of age and Galicia has also announced that it will do the same from July 1st.

Which other age groups have recently been included in Spain’s vaccine calendar?

In the Spanish central government’s Covid calendar website, the lowest age group mentioned currently are those aged 40 to 49.

Spain’s 17 regions and 2 autonomous cities are responsible for managing their own vaccine campaigns, and already some of them have announced their vaccine plans for younger groups too.

Catalan authorities for example have already said teenagers and adults under the age of 40 will be offered the Covid-19 vaccine starting in July 2021.

In Madrid regional public health vice president Antonio Zapatero has also said under 40s could start being vaccinated in July and in Castilla-La Mancha the 30 to 39 age group will start being offered the vaccine in the last week of June.

Which Covid-19 vaccine these younger age groups will receive is yet to be announced.

The following list breaks down the current order of Spain’s vaccination campaign, with information about what vaccine each age or priority group gets.

Both Pfizer’s and Moderna’s vaccines are reserved for the following groups, in order of priority:

3 Group 3A: other health and social workers who, although not on the front line, have a high level of potential exposure to Covid-19 ie primary care, dentistry and dental hygiene, basically any healthcare professional who treats patients who aren’t wearing a mask for more than 15 minutes.

4) Group 4: people with a high degree of dependency over 55 years of age.

8) Group 7: people under 60 years of age with preexisting health conditions that pose a high risk if infected with Covid-19.

9) Group 3B (over 55s): Workers involved in the management and response to the pandemic; health and social health personnel who have not previously been vaccinated; physiotherapists, occupational therapists, pharmacy workers, dental prosthetics workers; prison staff.

10) Group 3C (over 55s): The rest of the health and social health workers have not previously been vaccinated.

12) Group 6B (over 55s): teachers and staff at educational institutions for children under the age of six as well as at special education facilities.

13) Group 6C (over 55s): teachers and staff of primary and secondary education facilities.

We’ve listed the priority groups in the order provided by Spanish government for reference’s sake, but the country’s Health Ministry has said that “for organisational and feasibility reasons” the vaccination of groups 3A, 4 and 5A, 7, 3B, 3C, 6A, 6B and 6C may overlap.

That means that although your category may fall further down the list, you may be called up sooner than you think to get your vaccine.

Spain’s health ministry announced on April 7th that it would reserve the AstraZeneca Covid-19 vaccine for 60-69-year-olds only, after concerns about the risk of blood clots in other age groups.

The two million key workers who already received one dose of the AstraZeneca vaccine have been given a choice on which second dose they receive – either another AstraZeneca or Pfizer.

The single-dose Johnson & Johnson (Janssen) vaccine was initially allocated to Spain’s population group between 70 and 79 years old, but on May 12th Spanish health authorities allowed its use for those under 60 as well, with people aged 50-59 and those classified as vulnerable expected to be offered this vaccine first.

On June 1st, Spain’s Health Ministry approved the use of the J&J inoculation for people aged 40 to 49.