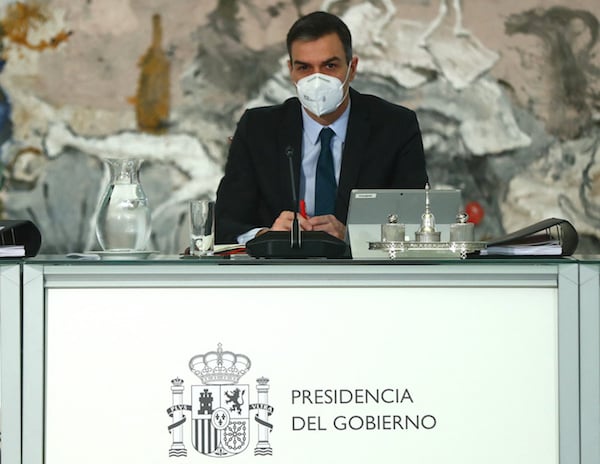 The latest clash between Prime Minister Pedro Sanchez's Socialists and his junior partners was triggered by this week's violent protests over the jailing of a rapper for controversial tweets with the demonstrations applauded by Podemos.

“All my support to the young anti-fascists who are demanding justice and freedom of expression in the streets,” Podemos MP Pablo Echenique tweeted on Wednesday, February 17th, night as the clashes were raging in Madrid.

Tensions were already evident earlier that day when Socialist lawmakers failed to applaud a parliamentary intervention by Podemos leader Pablo Iglesias, also a deputy prime minister. He has irritated the Socialists in recent weeks with his insistence that Spain lacks “democratic normality”.

Sanchez hit back on Friday when he finally broke his silence over the unrest. “In a full democracy – which Spain is – the use of any kind of violence is unacceptable. There is no exception to this rule,” he said.

There has been constant friction between the two parties since January 2020 when they formed Spain's first coalition government in modern times.

Sanchez only reluctantly joined forces with Podemos, admitting just a few months beforehand that forming a coalition with them would keep him up at night.

But in recent months the sparks have flown with greater frequency and over more issues, such as the Catalan regional elections on February 14th, said Anton Losada a political scientist at Santiago de Compostela University.

The main disagreements have been over social policy and immigration, portfolios held by the Socialists, with Podemos denouncing the treatment of thousands of migrants who have landed on Spain's Canary Islands, for example.

The tension doesn't surprise political consultant Euprepio Padula, who says there are “squabbles” in every coalition government, especially when an issue is ideologically important to one of the parties.

Political scientist Sonia Andolz of the University of Barcelona said Podemos would be “failing its electorate” if, for example, it did not criticise the jailing of rapper Pablo Hasel.

The friction in the coalition stems from the fact that the Socialists, as the majority partner, believe they should have the monopoly on government action “while the smaller party feels constantly threatened and feels the need to claim its space,” said Losada.

The Socialists have 120 seats in Spain's 350-seat parliament, while Podemos holds 35.

Jose Ignacio Torreblanca of the European Council on Foreign Relations said Podemos is “afraid of being rendered irrelevant” so it lashes out “viciously to maintain visibility and try and show there are two partners with the same strength”.

Despite the tensions, analysts believe the coalition could see out its term which ends in 2023. “I don't think there will be any significant government crisis,” said Padula.

One reason is there's “no alternative” on the right where the battle for dominance between the rightwing opposition Popular Party and the far-right Vox “is in full swing,” Torreblanca said. Podemos would be weakened if it left government, he said.

The party suffered setbacks in regional elections in Galicia and the Basque Country in July, and barely made a showing in the weekend election in Catalonia where the Socialists came in first, he said.

But both coalition parties risk losing support if their “guerrilla war” carries on and becomes the norm, Losada warned.

Voters get tired of “fights that they often don't understand or that have no relevance to their daily problems,” he said.