These are the current Covid-19 and Brexit requirements as well as the situation vis-à-vis flights for people wanting to travel from Spain to Britain and back.

IMPORTANT UPDATE: The rules for travel between Spain and the UK have changed on several occasions since the initial publication of this article. To find out the latest information on the Spain-UK travel rules in July, click here. The information below is no longer applicable necessarily.

As you’re probably fully aware of, now is a particularly difficult time to travel between Spain and the UK.

All travel corridors were suspended on January 18th until further notice, and according to the European Commission, all non-essential travel to and from the UK is discouraged for now.

That means UK nationals and residents in the UK can fly to the UK as long as they meet certain requirements. Spaniards can technically do so as well, but they also have to factor in Covid-19 requirements.

It’s worth remembering as well that national lockdown rules currently apply in England due to Covid-19 so check on gov.uk to find out the situation in the part of Britain where you’re travelling to. To check the regional restrictions in Spain currently click here.

Here’s an overview of all the aspects to factor in when travelling from Spain to the UK, and potentially back to Spain again.

When you arrive in the UK, you will need to self-isolate for ten days.

Spain is currently not on the UK’s red list, which includes travellers from 33 countries such as Portugal, Brazil, South Africa and the UAE.

From February 15, people travelling from these nations to Britain will have to remain under quarantine for ten days at an assigned hotel, and it’s the traveller who has to foot the £1,750 (€1,992) each.

So for now, as Spain is not on the red list, people flying from Spain to the UK can self-isolate in their accommodation of choice.

They will have to provide three separate Covid tests, however. PCR, LAMP and antigen lateral flow tests count as valid, according to the Spanish Embassy in London.

The first must be taken in the 3 days before your departure and you will need to provide proof of this negative coronavirus test at the airport before you leave for the UK.

The proof must be in English, French or Spanish.

You must provide the proof to the airline or ferry company you’re travelling with. 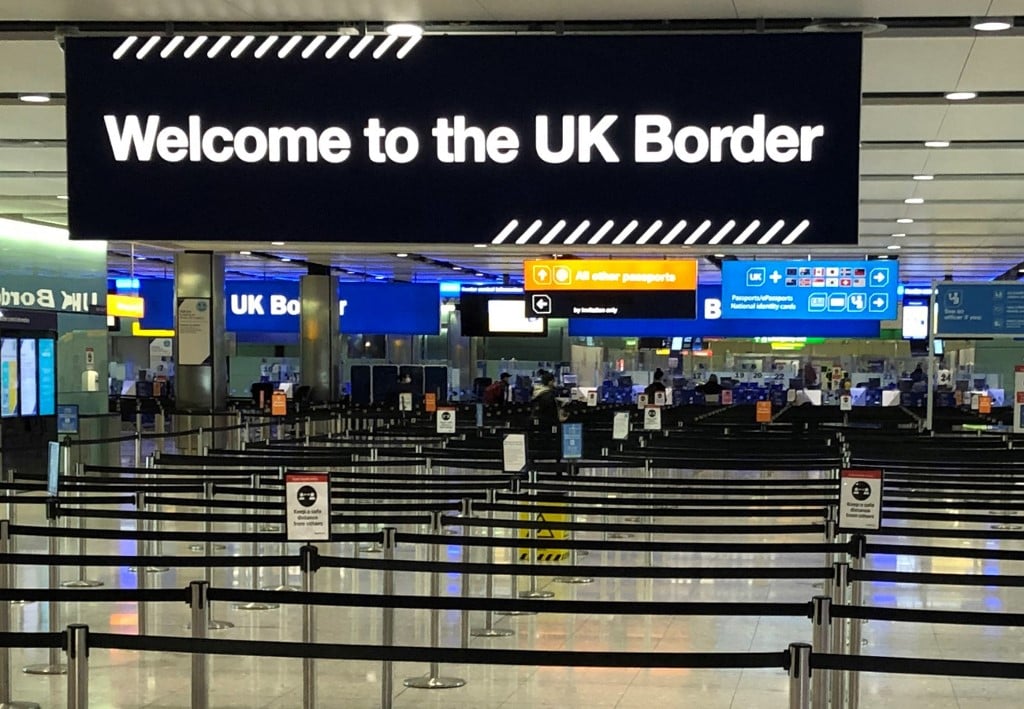 You will also need to provide your journey and contact details in the 48 hours before you arrive in the UK by filling in a passenger locator form which you must bring with you.

The next two PCR tests have to be taken two days and eight days into the ten-day quarantine period.

If you test positive you will have to self-isolate for a further ten days.

Children under 11 do not need a test, as well as those who have a job on the ‘exempt jobs’ list or those who are travelling to the UK for medical reasons.

Are there any flights?

British Airways, Easyjet and Ryanair have maintained flight routes between Spain and the UK, according to flight booking site Skyscanner on February 9.

However, there are reports on online forums for Britons in Spain in which members are saying that their booked flights for February, March and even April have been cancelled, moved to another date or another airport.

Ryanair did announce on January 11 that it would cancel dozens of its flights until late March, adding that it would notify all those affected.

It is difficult to give advice on what the best travel route is to avoid flight cancellations, but the general consensus would be that Madrid to London flights are more likely to be kept as a skeleton route, even though they’re not necessarily repatriation flights.

It is advisable to contact your airline even if you haven’t received a notification about your flights being cancelled, in order to find out about their specific requirements and to make sure your flight is indeed going ahead.

Despite the state of alarm and ongoing travel restrictions, non-resident Britons in Spain will have to leave the country before the end of March 2021, the British Embassy in Spain has told The Local.

Spain did issue a state bulletin in May 2020 in which it addressed the matter of overstays for all non-EU nationals during the early months of the state of alarm.

In the document the Spanish government explained how those people who were in Spain, with permission to stay for a period not exceeding 90 days, that has expired during the validity of the state of alarm, would see their stay automatically extended for a period of three months.

“The 90/180 day rule applies to any UK nationals who are visiting Spain for leisure purposes since January 1st 2021. Any stays beyond the 90 days in any 180-day period will be dependent on the applicable visas and immigration rules for Spain. This may require applying for a visa and/or permit.”

March 31st 2021 marks 90 days since Brexit came into force, making it the first deadline UK nationals who aren’t registered as residents or in the process of applying for residency have to meet.

In other words, they have to leave the Schengen Area – made of 26 European countries – and will not be able to re-enter for another 90 days if they’ve spent the first three months of 2021 in Spain or in the Schengen Zone.

UK nationals who have registered as residents in Spain will able to visit Britain without any time limitations.

The UK government has not made an official mention yet of the time limit for Spanish and EU citizens in Britain post-Brexit, but sources such as visitbritain.com say it’s 6 months whereas freemovement.org.uk states that there is no specific limit. Spaniards and other EU/EEA/Swiss citizens should check with their foreign office how long their stay in the UK can be.

Getting back into Spain

Spain extended a ban on arrivals by air from Britain again until at least March 30th over the new virus variants detected in the UK.

Only legal residents or nationals of Spain and the neighbouring micro-state of Andorra are currently allowed in on flights from the UK.

That means that UK second home owners who aren’t residents and Britons who want to visit Spain cannot do so until further notice.

According to Spain’s foreign ministry website, UK citizens who have to urgently travel to Spain should contact the British embassy in Spain.

As the UK is currently on Spain’s risk list, all travellers flying from the UK have to present a negative PCR, LAMP or antigen test taken within the last 72 hours.

There were cases in early January of UK holders of Spain’s old green resident certificate being denied the right to board their flights by airport staff who did not recognise the document as valid (when currently it’s just as valid as the new TIE residency card).

Although British consular authorities in Spain have moved to clear up this confusion with airport staff in both countries, it may be good to print and take with you this official document which explains what documents are valid as proof of residency.

From March 8th, there is also the Covid-19 Travel Declaration Form for international travel from England to keep in mind now.

“If any of you are returning from England to Spain, please be aware that as of today, Monday 8 March 2021, you will need to complete a travel declaration form providing the reason for your journey abroad and confirming that you are legally allowed to travel from England,” the UK Embassy in Madrid wrote on its Facebook page.
“You must complete this form if you are travelling outside the UK from England, and you may be fined if you do not. Different rules apply for international travel from Northern Ireland, Scotland and Wales.”
You should print a copy of the completed form or save it to a mobile phone or other device. Carriers will be checking the forms have been completed before boarding.