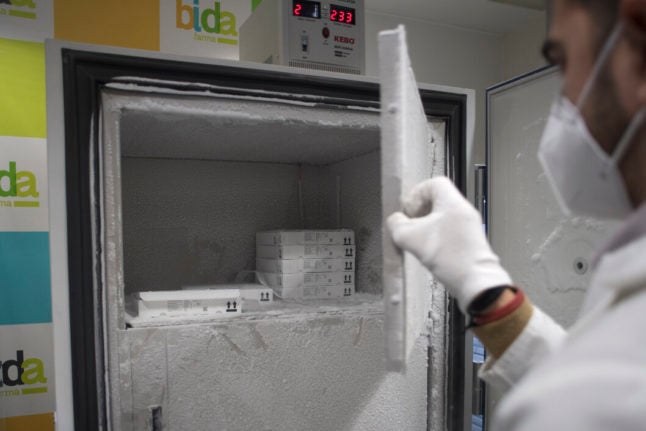 A laboratory technician stores vaccines at a distribution centre in Granada. Photo: AFP

As worldwide cases soar past 100 million, global governments are scrambling to get their hands on scarce vaccine supplies, with a bitter row erupting between Brussels and London over the AstraZeneca jab.

Although Spain secured early supply deals, delays in shipments of the Pfizer-BioNTech and Moderna vaccines have piled pressure on its 17 regions, which are responsible for managing the pandemic.

“We have had to suspend new first doses for at least the next two weeks due to lack of vaccine,” Ignacio Aguado, deputy head of the Madrid region, said Wednesday, urging the government “to move heaven and earth” to get more supplies.

Catalonia's health chief also said the region had practically finished its reserve supplies, warning that within days “the refrigerators will be empty”.

ANALYSIS: How can Spain hope to beat coronavirus with 'vaccine wars' brewing?

And at the weekend, the southern Andalucia region halted its programme because its strategic supplies were almost used up.

“Since no vaccines arrived last week, we had to draw on the strategic reserve that was gradually running out, so we stopped at the weekend so we could continue on Monday with what was left,” a regional health ministry source told AFP.

By Tuesday afternoon, the central government had sent in emergency supplies and the campaign resumed.

“If the health ministry hadn't sent this new shipment of 79,500 vaccines, we would have had to stop completely,” he said.

Spain has suffered one of the highest infection rates in Europe, counting more than 2.7 million cases and over 58,000 deaths and currently has one of the worst incidence rates of nearly 900 cases per 100,000 inhabitants.

Health ministry figures late Friday showed it has administered just over 83.3 percent of the 1.76 million vaccines received as part of the EU's vaccination plan.

Nearly 1.4 million people have received at least one shot, while nearly 252,000 have had the second jab.

And the shortages look set to continue.

“Last week we received 50 percent of what we should have received and this week.. we're going to experience the same, so Madrid cannot continue vaccinating healthcare professionals,” regional health chief Enrique Ruiz Escudero told MPs on Thursday.

Other regions also said they had only received half the expected supply and had only salvaged their campaigns thanks to their strategic reserves.

“When we said we were going to put vaccines in reserve, we had a lot of criticism, saying why didn't we just use all of the vaccine instead of reserving some?” said the Andalusian health ministry source.

“It turns out we were right.”

But medical professionals said both the government and the regions were at fault, with multiple vaccine strategies meaning it had been rolled out in an unbalanced way that sometimes left the most vulnerable exposed.

“On the one hand, fewer vials or doses than expected are arriving. On the other hand, it was 'every man for himself' to avoid being last in the vaccination rankings,” said Angela Hernandez, deputy head of Madrid's AMYTS doctors union.

The government was at fault for trusting the supply would turn up as promised, “and for not coordinating a joint, equitable plan with the regions”.

And the regions should have prioritised vulnerable groups rather than those which were logistically easiest.

“They should have set aside enough doses to finish vaccinating care home residents and staff before moving on to healthcare professionals,” Hernandez said.

Among healthcare staff, those with the highest exposure should have been prioritised, she said, flagging Madrid's “lack of coordination which had left frontline staff without the possibility of being vaccinated for at least two weeks”.

“With such a precious commodity, no effective treatment, and production and distribution problems on a global scale, we should have seen this coming,” she said.