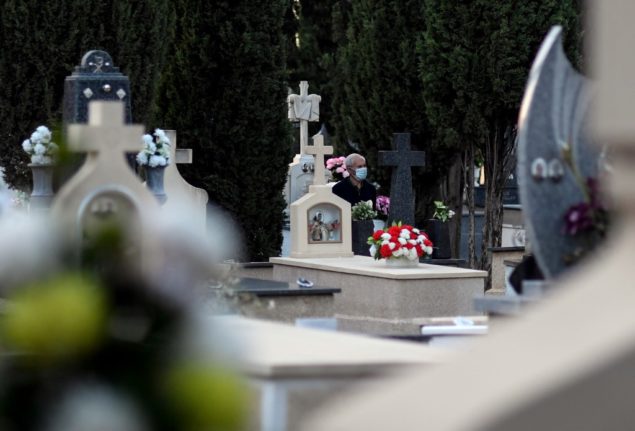 File photo of a cemetery in Spain: AFP

The family of Rogelia Blanco were told that the 85-year-old had died on January 13, two weeks after she was among a group of elderly residents transferred to another centre for care after contracting coronavirus.

The funeral was held the next day but due to coronavirus protocols neither her husband or other family members were able to attend.

But on Saturday she arrived fit and well back at the residential care home in Xove, in Galicia’s Ourense province, much to the surprise staff at the centre and of course her husband Ramón, who was mourning her death.

“I could not believe it. I was crying, after the death of my wife,” he told La Voz de Galicia.

It seems that the family had mistakenly been told of her demise after nursing home authorities accidentally switched her identity with that of another woman being treated for covid in the same room.

After testing positive for Covid-19, both women had been transferred to share a room at the Os Gozos care home in Pereiro de Aguiar, some 200 km from Xove for treatment.

But in the course of transferral, the names of the two women were switched.

“Among the elderly people transferred were two women who were assigned the same room,” said a statement from the Fundación San Rosendo which runs the care homes.

“An identification error during the process of transfer from Xove to Pereiro de Aguiar led to the death of one of them being certified on Jan. 13, although the identity was wrongly assigned,” it said adding that the Foundation “deeply regretted the mistake”.

While Rogelia’s family are celebrating the fact that she isn’t dead after all, the family of the true victim who has now been correctly identified as Concepción Arias, a 90 year-old known as Conchita, are devastated.

“They told me she had recovered,” Conchita’s brother told La Voz de Galicia. “But when I travelled to the care home to visit her I discovered that actually she had died ten days ago and been buried under another name”.