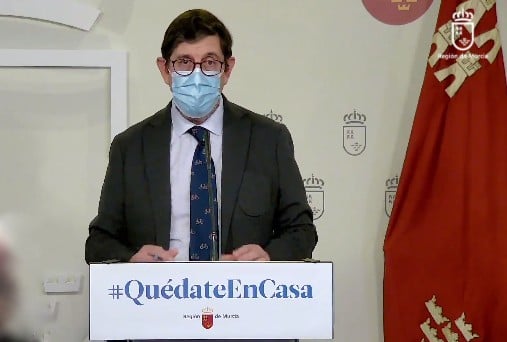 Manuel Villegas stepped down from his post as health chief of Murcia region on Wednesday. Photo: Murcia Salud

Manuel Villegas, a cardiologist who worked as a doctor and hospital director before being appointed regional health minister in 2017, stepped down after admitting that he had the jab despite not belonging to any priority group designated for initial inoculations under Phase One of Spain’s vaccination programme.

Local media reports that he had received the first dose of the vaccine ahead of others in the priority group, first emerged on Tuesday prompting calls for him to be fired.

But the health chief intially justified the vaccination by insisting that as a doctor he qualified for the early shot. He said the nature of his job as regional Health Minister involved frequent meetings with other health workers who had a high risk of infection.

“My papers say I’m a doctor, they don’t say I’m a politician,” he told a news conference earlier on Wednesday, adding that some 400 members of his department had already been inoculated.

“It was a decision that I believed in and I continue to stand by it,” he said.

But his remarks sparked even more outrage across the political spectrum and on Wednesday evening, Murcia’s regional premier Fernando Lopez Miras confirmed he had reluctantly accepted Villegas’ resignation.

“Today it is my turn to say goodbye to an admirable man … Villegas has been exemplary and his performance has been impeccable,” he told a news conference.