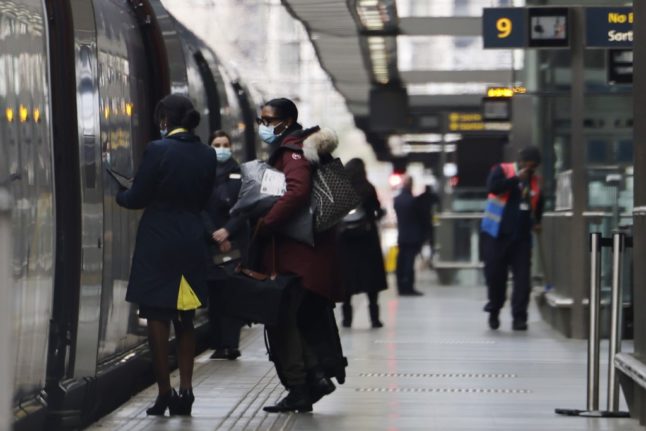 Eurostar passengers head to France from the UK but could passenger traffic be halted in future? AFP

Under a proposal put forward by Germany, the EU would be allowed to halt passenger traffic from “third-countries” where the virus variants are prevalent in order to protect public health.

If adopted that would mean all passenger services between non-EU countries, including the UK which is struggling to deal with a spike in infections blamed on a more contagious variant, and the EU could be suspended for a “limited time”.

The proposal states: “Where member states consider this necessary to protect public health, they are free to impose temporary bans on entry and on transporting passengers entering from [non-EU] countries with virus variant areas.”

Travel is already heavily restricted between the UK and the EU, partly because of the ongoing lockdown in the UK but mainly because the EU has barred non-essential travel from non-EU countries since March 2020.

Individual countries like France have also imposed strict rules for travellers from non-EU countries such as the UK including mandatory negative test and quarantine for all arrivals.

Germany itself has imposed similar measures.

But the German proposal wants to limit the exemptions for “essential travel” which have been in place since the first wave of the coronavirus pandemic.

These exemptions have allowed travel for EU citizens or residents returning home but also covered groups such as delivery drivers, diplomats, cross-border workers and those travelling for “imperative family reasons”.

In what would be a controversial move, Germany is proposing that any ban on passenger traffic could also cover EU citizens and those who have residency in the country, which would prevent them from travelling home.

… and other countries where the dangerous ? variants are prevalent. The passenger traffic ban would also apply to ?? citizens & residents wishing to return to the ?? from the ?? (?? proposal)
I would say this is probably the most controversial proposal on the table: pic.twitter.com/Ogug7ea1pM

German Chancellor Angela Merkel signalled she was seeking a tightening of border controls earlier this week when she announced an extension and tightening of domestic Covid-19 restrictions.

If countries didn't act then Germany would go it alone, she warned.

“If countries should decide to take different paths… you have to be ready to say then, we'll have to reintroduce border controls. We don't want that, we want to find an agreement with our partners, but we can't have that (infections) just coming because other countries are taking another path,” she said.

France, too, has been keen to find a Europe-wide solution on travel restrictions. However individual EU countries are free to make their own decisions on border issues, so could opt out of the measures and decide on their own.

France banned all passenger and goods traffic from the UK just before Christmas over concerns raised about the rapid spread of the new variant.

The German proposal will be discussed at the EU council meeting on Thursday which will be held by video-conference.

“Only if member states take joint and coordinated action, can the virus be contained effectively,” said the German proposal.

“For this reason we see an urgent need to act in order to prevent or at least slow down the spread of worrying virus variants to and within the EU area plus Switzerland, Norway, Lichtenstein and Iceland.”

The UK-based Times newspaper, which reported the story, believes it will be adopted in some form.

“The move has the backing of Angela Merkel, the German chancellor, and is almost certain to be agreed,” the paper says.