After the worst snowstorm in decades, Spanish officials were racing on Sunday to clear the roads of snow before a cold snap transforms them into icy death traps.

“Our aim is to make the most of every minute before Monday when the drop in temperature happens,” to clear the roads, Madrid's mayor Jose Luis Martinez-Almeida said late on Saturday.
“From then, until the end of the week, it's going to be very difficult to get about,” he told Sexta television.
READ ALSO:
The capital Madrid and the surrounding region was one of the areas worst hit by the snow, with levels of snowfall not seen since 1971.
The army also had to clear the snow from Madrid airport, one of the regions worst hit by the snowstorm, which had forced the cancellation of flights from late Friday. They are not due to be reopened until Sunday afternoon at the earliest.
They also had to clear access to the city's hospitals, still struggling to cope with the country's coronavirus crisis.
Despite, the inconveniences, many in Madrid took advantage of the rare snowy conditions, building elaborate snowmen around the city, and having epic snowball fights. 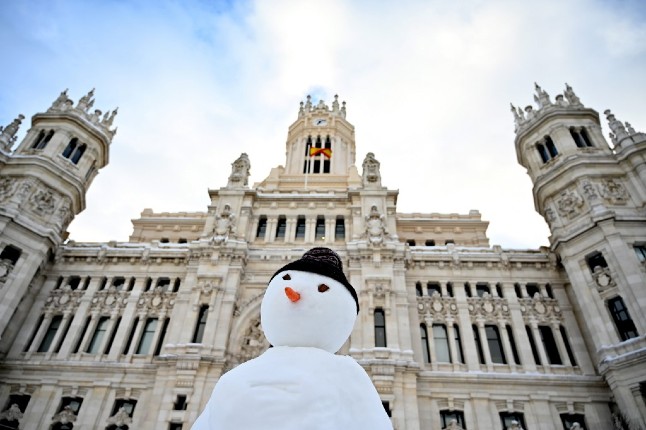 A snowman outside the Cibeles Palace in central Madrid. Photo: Gabriel Bouys/AFP
The storm, through Friday and Saturday, left much of the country under dozens of centimetres of snow, an amount rarely experienced in Spain, blocking many major roads.
More than 700 major routes were still impassible Sunday morning said the government, with rail travel to and from Madrid also cancelled, at least until Sunday afternoon.
The authorities in the capital have closed the city's schools, colleges and universities at least until Wednesday.
As well as the Madrid region, the exceptional conditions hit another four regions — Aragon, Valencia, Castilla La Mancha and Catalonia — hard Saturday.