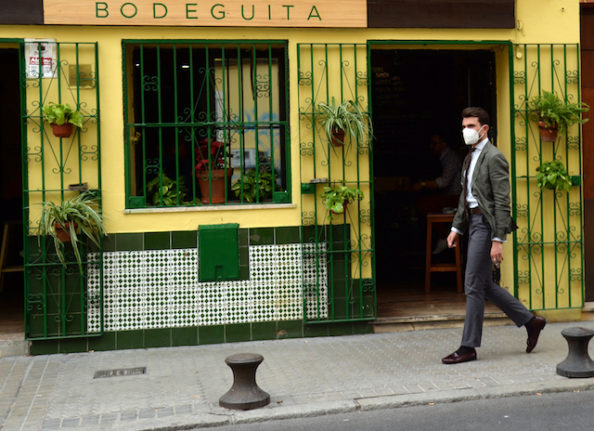 Regional authorities have set their own restrictions for each of Spain’s 17 autonomous communities and two city enclaves in North Africa.

So far, the government of Socialist Prime Minister Pedro Sanchez has resisted following the lead of other European nations which have reimposed lockdowns, arguing its highly-localised restrictions are enough.

Under Spain’s decentralised political system, its 17 regions are responsible for handling the pandemic, although the central government could intervene to declare a national lockdown as it did in March.

Here’s a breakdown of all the restrictions in place in each of the regions of Spain.

Since May 3rd, the borders of 16 health zones and two localities (San Agustín de Guadalix and Manzanares El Real) have been closed due to exceeding 500 cases per 100,000 inhabitants in the last 14 days.

You can follow this link to find out which health zones have opened or closed their borders and until when.

It was announced the from the end of the state of alarm on May 9th, bars and restaurants will be able to open continuously until 11pm with a limit of 30 percent capacity inside and no limit on the terrazas.

These are the current restrictions that are in place.

Aragón relaxed some of its restrictions on April 13th, while also announcing the border closures of some of its areas.

Most of La Rioja is currently at a level four, but there are still a few areas which remain at level five and six. The current restrictions are:

Castilla y León’s regional government has closed the interior of bars and restaurants in 20 different municipalities.

Other restrictions in place include:

The Balearic Islands have announced that they will relax some of their restrictions. The new rules came into force on April 24th. This includes changing the curfew across all islands from 10pm to 11pm.

Mallorca, Ibiza and Formentera are at level 2 and Menorca is at level 1.

On May 5th, the new level changes in the municipalities will come into force, with Ulea as the only one at extreme risk. The current restrictions include:

Restrictions may vary slightly depending on where you live and level of alert your area is in.

The Canary Islands operates a traffic light system with each island on an alert level depending on the infection rate and with different rules in place for each level.

As things currently stand, La Palma, La Gomera, and Fuerteventura are at Level 1. Tenerife, Lanzarote, Gran Canaria and El Hierro are at Level 2.

The Canary Islands’ infection rate continues to be the lowest of all regions in Spain.

For a detailed breakdown of all the rules, see the government bulletin HERE.

All those arriving on the islands from outside Spain from destinations classified as high risk must show a negative test  (PCR, TMA or LAMP) before boarding. For those coming from “safe destinations” or mainland Spain an antigen test is valid and must be shown at your accommodation.

Since April 29th, Andalusia allowed travel between its 8 provinces for the first time in 3 months. Andalusia’s regional borders remain closed.

On April 23rd, the rules changed slightly due to the rise in Covid cases. 43 municipalities across the region must stop all non-essential activities completely for the next 14 days. These include 21 municipalities in Granada, 10 in Jaén, five in Cádiz, three in Malaga, two in Seville and one each in Almería and Huelva.

Municipal confinement is imposed on every city with a population of over 100,000 in addition towns that see infection rates rise above 500 cases per 100,000 and the closure of all non-essential businesses in municipalities where the rate tops 1,000 cases per 100,000 people.

Restrictions also vary slightly between which alert level each municipality in each province is in. Most are currently at level 2.

The current measures are:

The current restrictions are:

The current restrictions in Cantabria include:

The municipalities of Laza (Ourense), Cualedro (Ourense) and Vilanova de Arousa (Pontevedra) are all at extreme risk and their borders are currently closed.

The autonomous community has split its municipalities up into different levels depending on the number of cases.

Click here to find out which municipality is at which level.

Municipalities that have had more than 500 cases per 100,000 residents in the last 14 days will remain closed.

Most restrictions in the Basque Country will remain in place until the end of the state of alarm on May 9th.

From April 27th, the region announced the closure of the borders of 79 localities, including the cities of San Sebastián, Vitoria and Bilbao. On May 4th, several more localities were added to this list.

The borders of any municipality with an incidence rate higher than 400 cases per 100,000 inhabitants will stay closed.

Navarra has announced that the current regional restrictions will remain in place until the end of the state of alarm on May 9th. These are: