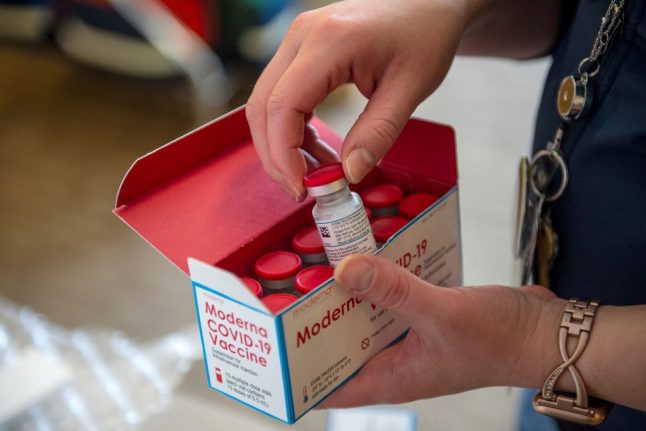 Moderna vaccine has been given green light by the EMAAFP

On Wednesday the European Medicines Agency (EMA) announced it had approved the Moderna vaccine in the fight against Covid-19.

It follows approval last month for the Pfizer-BioNTech vaccine that is in the process of being rolled out across the EU.

The final authorisation for the Moderna vaccine will need to be granted by the EU Commission.

“Now we are working at full speed to approve it and make it available in the EU,” she added.

“This vaccine provides us with another tool to overcome the current emergency,” said Emer Cooke, Executive Director of EMA. “It is a testament to the efforts and commitment of all involved that we have this second positive vaccine recommendation just short of a year since the pandemic was declared by WHO.

The approval also clears the vaccine for use in Norway and Iceland, which are signed up to the EU's procurement scheme.

Good news for our efforts to bring more #COVID19 vaccines to Europeans!
@EMA_News assessed that the @moderna_tx vaccine is safe & effective.

Now we are working at full speed to approve it & make it available in the EU.

The vaccine will help governments across the EU battle against Covid-19 infections which have remained high throughout December and forced many countries to introduce further restrictions.

? EMA has recommended granting a conditional marketing authorisation for COVID-19 Vaccine Moderna to prevent #COVID19 in people from 18 years of age: https://t.co/l9KMZlx7wa pic.twitter.com/BdvXanjOHN

A very large clinical trial showed that COVID-19 Vaccine Moderna was effective at preventing COVID-19 in people from 18 years of age.

Efficacy was calculated in around 28,000 people from 18 to 94 years of age who had no sign of previous infection.

Since November 9th, four manufacturers have announced that their vaccine is effective: Pfizer-BioNTech, Moderna, the British alliance AstraZeneca-University of Oxford and the Russian state institute Gamaleia.

These announcements are based on phase 3 clinical trials that involve tens of thousands of volunteers.

The scientific journal The Lancet confirmed on December 8 that AstraZeneca's vaccine was 70 percent effective on average.

The AstraZeneca-Oxford vaccine is the least expensive at around €2.50 per dose. The vaccines from Moderna and Pfizer/BioNTech have a logistical handicap, as they can only be stored over the long term at very low temperatures (-20° Celsius for the former, -70°C for the latter).