For children in Spain, it's the most wonderful time of the year, when the Three Kings or "Reyes Magos" come laden with gifts, but what will the parades look like this year amid the ongoing Covid-19 pandemic.

Typically, on the night of January 5th, Gaspar, Balthazar and Melchior parade through the city streets with their grand entourage, throwing basketfuls of sweets into the crowds of excited children.

Every year, millions flock to the streets across Spain to welcome the royal visitors and watch the glittering processions, this year however, all large gatherings have been cancelled and the usual parades won’t be able to take place.

Local councils across the country have been trying to come up with creative ideas on how children can still meet the Three Kings and enjoy the magic of the night.

In Barcelona, organisers have been working on a detailed plan “since the summer”, fearing even back then that life would not yet have returned to normal come January.

“It's a really traditional celebration – total madness, a real family event with dancing, lights, floats and everyone packing the streets to watch,” said Esteve Carames, in charge of Barcelona's Reyes festivities, which normally sees 700,000 people massed along the three-kilometre (two mile) route.

The Three Kings will be arriving by boat, like always, but the royal landing will be broadcast live from Barcelona's port on TV, after which they will screen footage of a parade recorded in advance.

Barcelona has also set up an open-air amusement park based on The Three Kings. With a capacity for 400 visitors, it has lights, music and scenery, but no actors and nothing that can be touched. The 50,000 free tickets to enter the park, which is open from December 28th to January 5th, were snapped up in just four hours.

Somewhat surprisingly, this year's festivities have been more expensive than previous years, coming in at around 1.2 million euros compared with 800,000 euros in a normal year, given the extended duration of the events.

Behind closed doors in Madrid

In Madrid, which normally puts on some of Spain's biggest parades, drawing hundreds of thousands of visitors, City Hall is putting on a live televised event inside a cultural centre with no spectators present.

“It is the most special night of the year and we wanted the magic to be felt throughout the city,” said Andrea Levy, one of the capital's top cultural advisers. And fireworks will be set off “to mark the arrival of the Magi,” she said. 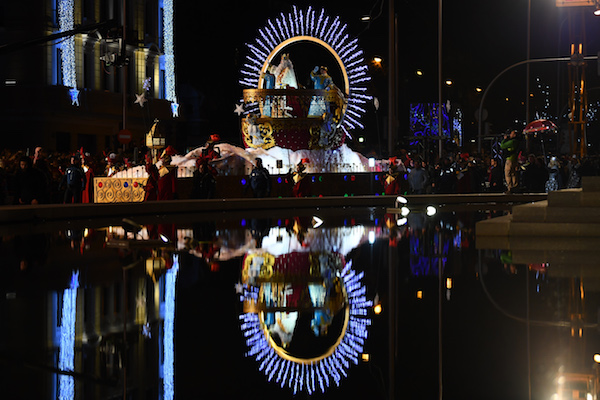 Taking to the skies in Seville

In the Andalusian city of Seville, the Three Kings will take to the skies in a hot air balloon, so that children can watch from balconies and rooftops. Organisers told Diario de Sevilla however, they can’t control which way the balloons will go, because “it all depends on the wind”.

By bus in Granada

In Granada, the Three Kings will tour the city in an open-top bus, footballer-style, for four hours without stopping, in order to avoid people gathering to watch and creating crowds.

It will start at 5pm and travel through all the city’s districts, so that many families won’t even have to travel far from their front doors to be able to see them.

The city of Alcoi, in Alicante, is home to one of the oldest parades in Spain, dating all the way back to 1866. It’s also one of the grandest and most elaborate in the country.

Here, the event will be broadcast live across the city and families will be able to watch through the City Council’s Facebook page. They will be showing only the culmination of the parade – the ‘Adoration’ which is when the Kings present their gifts to the baby Jesus in the Nativity scene.

In Malaga, the event will be televised with no public allowed. The Kings will arrive at the Alcazaba, before making their way to the Cathedral to make an offering.

The broadcast will begin at 5pm and be shown on TV. Children can also watch and follow what’s going on live via the City Council’s Facebook page, on Twitter @malaga or on Instagram @ayuntamientomalaga.

Since December 29th, giant figures of the Kings have also been circulating through the streets of the historic centre, so that kids can see them in person too.