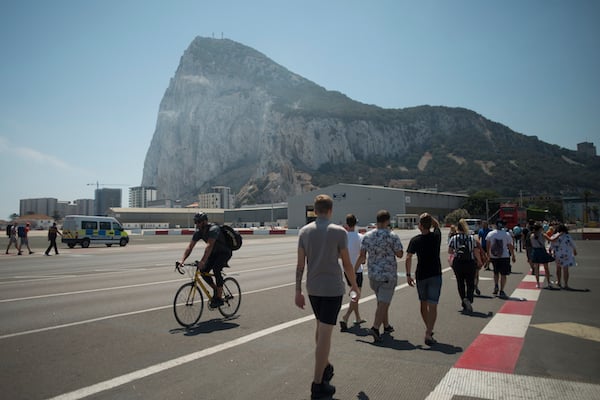 Negotiators representing the governments in Madrid, London and Gibraltar have been working around the clock to ink a deal to avoid the creation of a new “hard border” between the tiny British territory and the European Union that would have caused huge disruption for travellers and businesses on both sides of the line.

“We have reached an initial agreement with the United Kingdom which will serve as the foundation for a future treaty between the European Union and the United Kingdom concerning Gibraltar,” Foreign Minister Arancha Gonzalez Laya told reporters in Madrid.

In a separate address, Gibraltar's Chief Minister Fabian Picardo said the deal set the stage for a treaty that would allow for “maximised and unrestricted mobility” of people and goods across the border.

“We're going to avert the worst effects of a hard Brexit,” he said of the deal which was finalised in “the early hours of this morning” describing it as “a proposed framework for a UK-European Union agreement or treaty on Gibraltar's future relationship with the EU”.

The deal was announced a week after Britain reached its own last-minute post-Brexit trade agreement with the EU although it did not cover Gibraltar, a tiny British territory on Spain's southern tip which is historically claimed by Madrid.

The agreement was hailed on Twitter by the Spanish and British prime ministers, with Spain's Pedro Sanchez saying it marked the start of “a new era” that would allow for “the removal of barriers”, while Britain's Boris Johnson “wholeheartedly” welcomed the deal, stressing the UK's commitment to “the protection of the interests of Gibraltar and its British sovereignty.”

Schengen at the border

Under terms of the agreement, Gibraltar would become a part of the Schengen zone with Spain acting as guarantor, Gonzalez Laya said. Schengen covers most of the 27 EU members, along with Norway, Iceland, Switzerland and Lichtenstein.

“With this (agreement), the fence is removed, Schengen is applied to Gibraltar… it allows for the lifting of controls between Gibraltar and Spain,” she said.

“Until the agreement comes into force, we will use the arrangements permitted under Schengen to relax controls at the border,” she said, indicating the UK and the EU were expected to sign the deal “within an estimated six months”.

Picardo said Spain would be responsible for managing the Schengen arrangement which would be implemented by Frontex, the agency charged with protecting the EU's external borders. “This will be managed by the introduction of a Frontex operation for the control of entry and exit points,” he said. The arrangement will be in place for an initial four-year period.

With a land area of just 6.8-square kilometres (2.6-square miles), Gibraltar is entirely dependent on imports to supply its 34,000 residents, a no-deal scenario would have slowed the cross-border movement of goods with new customs procedures.

Border fluidity is also key for some 15,000 people who cross into Gibraltar every day to work, accounting for half of the territory's workforce. Most are Spanish and live in the impoverished neighbouring area of La Linea.

At the border, few workers had heard about the agreement but expressed relief a deal had been reached.

Ada Vazquez, a 32-year-old single mother who has been crossing the border to work for the past 14 years, told AFP it was “good news”. “This agreement is a relief for us,” said Vazquez who works in a chocolate shop. “I was afraid there would be long queues.”

Gibraltar also welcomes around 10 million visitors per year, mainly day-trippers who cross from Spain, drawn in part by the duty-free shopping.

For years, EU residents have only had to show their national identity documents at the border. Had there been no deal, they would have had to have their passports stamped sparking fears of long queues “lasting hours”.