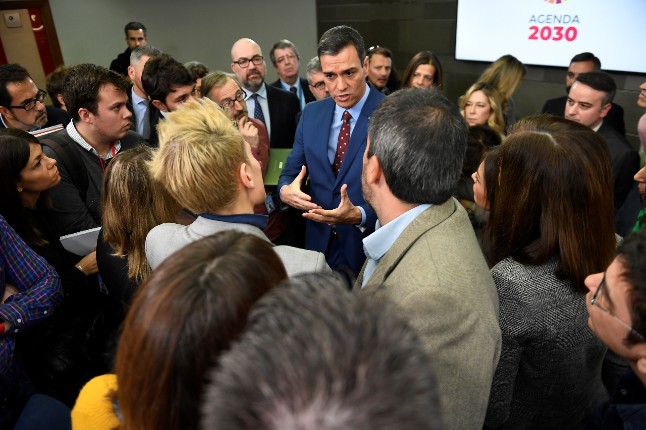 Spain's prime minister Pedro Sanchez talks to journalists in January last year after unveiling his new coalition with Podemos. Photo: Pierre-Phillippe Marcou/AFP
The measure is being pushed by far-left party Podemos, the junior partner in Socialist Prime Minister Pedro Sanchez's minority government which has ruled the eurozone's fourth largest economy since January.
Deputy Prime Minister Pablo Iglesias, the leader of Podemos, announced earlier this month that the labour ministry was looking into reducing work hours, saying this “could without a doubt favour the creation of employment”.
He was responding during a TV interview to the proposal made by a far-left lawmaker that called for the work week to be reduced to 32 hours from the current 40 hours.
“Work time requires a new concept which dares to challenge, as we do, the laws and customs of the working world,” added Labour Minister Yolanda Diaz, also from Podemos, on Twitter.
The proposal comes as the New Zealand branch of Unilever earlier this month began a trial of a four-day work week for its staff in the country. Germany's powerful IG Metall union has also floated the idea.
'Quality of life'
But in Spain the idea has been met with reluctance from the Socialists, the dominant party in Spain's first coalition government since its return to democracy in the late 1970s.
Budget Minister Maria Jesus Montero said the government “must not lose focus” from its main priority, which is “to return to the growth rates which we had at the start of the pandemic”.
Spain's heavily tourism-dependent economy had consistently outperformed much of Europe since it emerged from a five-year slump in 2013.
But the International Monetary Fund (IMF) sees the country's GDP slumping by 12.8 percent this year, in what would make it the hardest-hit nation among the world's advanced economies.
“I don't think this issue is a priority for Spain, given the current levels of productivity and competitiveness,” said Social Security Minister Jose Luis Escriva, in a reference to productivity levels well below the European average, partially due to the large proportion of small businesses. “I don't think there is room for that,” he added.
But Spain's second largest union confederation, the UGT which is close to the Socialists, has long called for a four-day work week, with a fifth day dedicated to professional development.
“With this, we will gain competitiveness, quality of life and employment,” said UGT leader Pepe Alvarez.
'Pipe dream'
Spain's largest union, Comisiones Obreras also backs the four-day work week but says it prefers to focus on raising the minimum wage and reforming Spain's labour code in its talks with the government and businesses.
The proposal for a shorter work week has irritated employers.
“With all that we are dealing with, it's a pipe dream,” tweeted the vice-president of Spain's main business lobby CEOE, Lorenzo Amor.
The governor of the Bank of Spain, Pablo Hernandez de Cos, has warned the measures “need a very rigorous analysis”.
“If someone works for four days instead of five, what happens to their salary?” he asked, explaining that the impact a shorter work week will have on job creation will hinge on the effect of the measure on labour costs.
Diaz, the labour minister, admitted that the proposal the way it was made was too “rigid” and “ineffective for certain sectors”.
“The key question is to move towards greater internal flexibility within companies, and above all to allow each employee to adapt their own working times,” she added.