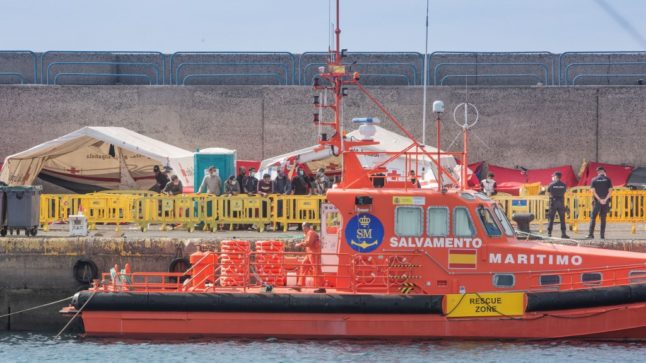 File image of migrants arriving in port of Arguineguin on Gran Canaria.Photo: AFP

Eight people died when a rickety boat carrying migrants capsized off Lanzarote in the Canary Islands, the emergency services on this Spanish archipelago said on Wednesday.

Rescuers had initially given a toll of four dead after the boat went down just off Orzola, a village at the northern tip of Lanzarote island, at around 7:30 pm (1830 GMT) on Tuesday evening.

But they later found another four bodies, the 112 emergency services said on Wednesday morning.

More than 18,000 people have landed on the Spanish archipelago since the start of 2020, some two-thirds of them in the past few months, after making the perilous trip by boat from the African coast.

Spain is in the process of setting up emergency camps for up to 7,000 people as it seeks to tackle the huge influx of arrivals in the Canary Islands, while also stepping up a diplomatic offensive in various African countries to slow the rate of departures.

The current wave has echoes of the crisis of 2006 when 30,000 migrants reached the Canaries, prompting Spain to step up patrols and ink repatriation agreements.