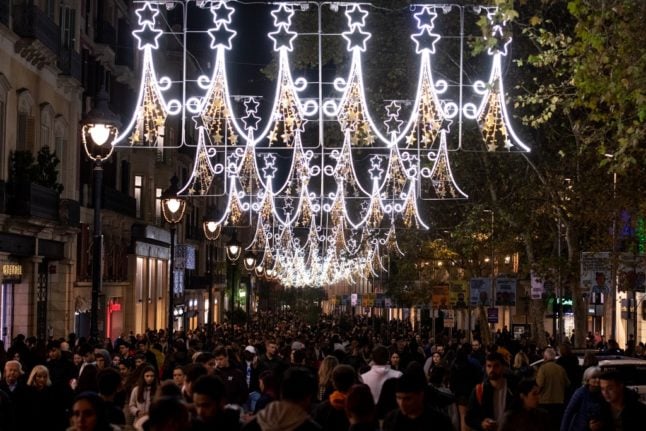 A packed Barcelona street during Christmas in 2019; a scene we don't expect to see this year. Photo: AFP

Catalonia’s Department of Health will allow a maximum of ten people to gather for family get-togethers this Christmas, the equivalent of two ‘regular coexistence’ bubbles.

This unfortunately means people in Catalonia won’t be able to see all their extended family at a large gathering this Christmas and will not be able to organise a big party for New Year’s.

The Catalan government has finally backtracked and decided to allow people to enter and leave the region over the Christmas period, after their initial closed borders policy was highly criticised for not allowing families and friends to spend Christmas together.

Catalonia’s closed borders measure in place currently will be lifted on December 21st.

If you’re planning to leave Catalonia to spend Christmas somewhere else in Spain or abroad, you will have to check the measures of the place you are going to.

The perimetral confinement at weekends will be between areas (comarcas) rather than municipalities until December 21st, when this will also be scrapped.

It will also be possible to go on a skiing holiday in nearby Andorra, although temperature checks and capacity limits will apply to anyone wanting to hit the slopes.

Catalonia’s curfew will however remain in place over ‘Nadal’, so from 10 pm to 6 am people have to stay indoors.
That means not ringing in the New Year outdoors as is often the case in Catalonia and in Spain.

The traditional “Misa del Gallo” Catholics celebrate around midnight on Christmas Eve will have a reduced capacity of 30 percent, with a maximum of 100 people allowed to gather at each mass.

Many services are likely to be brought forward to allow churchgoers to return home before curfew starts.

Starting on Monday November 23rd, the regional government will allow bars and restaurants to reopen, although only until 9:30 pm and with a limit indoors of 30 percent of their capacity. By December 7th this will be increased to 50 percent.

Outdoor terraces will be allowed to operate at 100 percent capacity after Catalonia’s hospitality industry spoke out against the regional government’s initial Christmas restrictions plan.

There will still have to be a 2.5 metre separation between tables and only four people per table, unless they are more people who form part of the same coexistence 'bubble' (for example, parents with three or more children).

If you’re meeting friends or family for a drink or coffee, it can only be until 18.30 as from that time onwards only meals will be served.

From December 7th, cinemas, theatres and concert halls will be allowed to open at 70 percent of their normal capacity, or a maximum of 500 people per venue.

Shops and markets will be able to open at 50 percent of their capacity whereas shopping centres will have to stick to a 30 percent limit and not have any common spaces in use.

You still have to respect the curfew hours, but if for example the film you go to watch at the cinema ends at 9.45pm and you don’t have time to get home before 10pm, showing your ticket can serve as a valid justification if you get stopped by police.

Gyms will also be allowed to open at 30 percent of their usual capacity and with an appointment.

For outdoors sports activities there’s a limit of 6 people (except for federated athletes) until December 21st.

Aside from the curfew dampening any hopes of late-night Christmas revelry, there are no plans for nightlife venues to reopen during the festive season.

The traditional Three Wise Men parades (Cabalgatas de Reyes) on January 5th, the night before kids in Catalonia and all over Spain get the bulk of their presents, has regrettably (but understandably) been cancelled across cities and towns in the region.

Children will have to settle for seeing Gaspar, Melchior and Baltasar on TV this year.

Fortunately, other traditional Christmas events such as the Santa Llúcia market at the Sagrada Familia or the nativity scenes at the Museu Marés will be allowed to take place.

READ MORE: The eased restrictions that come into force in Catalonia on Monday November 23rd

The Catalan government will take stock of the region’s infection rates every 15 days to determine whether any measure from their 4-tier de-escalation plan should be changed (the Christmas period from December 21st until January 4th is phase 3).

The measures above are valid as of November 21st but Procicat, the Catalan government handling the pandemic, has tweaked and changed measures previously without necessarily sticking to the two-week rule.

A poll by regional daily La Vanguardia found that 93 percent of readers believed that the local Generalitat government hadn’t handled measures in the region properly.