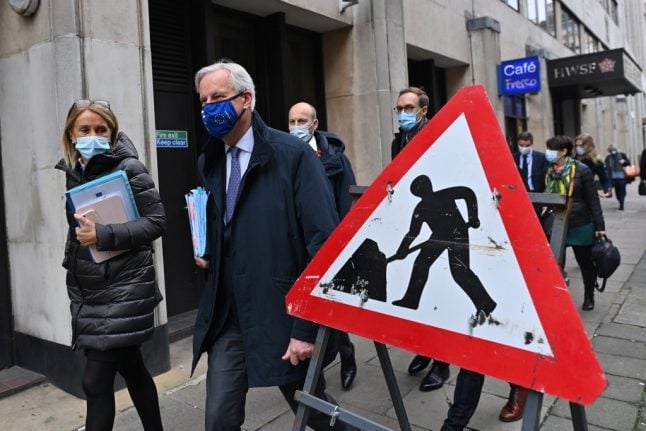 EU chief negotiator Michel Barnier on his way to continue negotiations on a trade deal in London. Photo: AFP

If you’re following the UK/EU Brexit negotiations, you’re probably suffering from a severe case of déjà vu. Over the last days, weeks and months, we’ve heard repeated claims that lose some of their potency with each utterance. “Time is running out”, a deal is “difficult” but “doable”, and both sides are working hard to secure the deal they really want.

Throughout the endless months of talks – and talks about talks – the difference in tone between the EU and UK has been obvious. The approaching deadline has not dampened the UK’s bullish stance or the EU’s air of calm professionalism.

This week’s latest (last?) round of talks in Brussels began with a series of tweets by the UK’s lead negotiator, Lord David Frost. On Sunday evening, he mentioned that some progress had been made, but ended on a pessimistic note.

His Twitter thread concluded: “But we may not succeed. Either way, as the Prime Minister @BorisJohnson made clear on October 16th, people and business must prepare for the change that is coming on 31 December, most of which happens whether there is a deal or not.”

4/4 But we may not succeed. Either way, as the Prime Minister @BorisJohnson made clear on 16 October, people and businesses must prepare for the change that is coming on 31 December, most of which happens whether there is a deal or not.

The EU’s chief negotiator, Michel Barnier, clearly had a different outlook on Monday morning, tweeting that the EU “remains determined, patient, respectful. We want our future cooperation to be open but fair in all areas”. Considering the games that the UK government has played – such as threatening to break the existing legal agreement – the EU’s patience must have been tested many times over.

Despite some progress, including the preparation of hundreds of pages of legal text, the same issues are causing the biggest problems in the negotiations. A few weeks ago, there seemed some willingness to compromise over one of the most contentious issues – fisheries.

However, latest reports suggest that both sides are still “miles apart”, despite the EU offering access to its energy market in return for access to fishing waters. That arrangement is worth more to the UK than fishing, which represents just 0.1percent of GDP. Clearly, the UK’s position here is political, not economic. By contrast, the services sector, which contributes 80percent to UK GDP, has largely been ignored throughout the Brexit debate.

The issue of the level playing field is another bone of contention and is seemingly without a resolution. It appears the UK is resisting the ability for either side to retaliate, should either party deviate from the level playing field. The thorny question of which body will deal with any disputes also remains.

Prime Minister, Boris Johnson, has recently been relatively silent re the Brexit negotiations, leaving cabinet ministers to maintain a running commentary. Some recent statements by ministers show that it’s not just Boris who doesn’t understand the details. Environment Minister, George Eustice, suggested on Sunday that if the EU imposes tariffs on lamb, sheep farmers could simply switch to producing beef. You just can’t get the staff these days.

According to Whitehall sources, the prime minister has been the most hardline of the cabinet in holding out for better terms. Following suggestions that the UK negotiating stance would soften after Dominic Cummings departed Downing Street, Johnson was described as the “hardest in the room”.

Whether that’s true or not, the issue is can anyone find him? On Monday, it was announced that Johnson has gone into self-isolation, following a meeting with a Covid-infected MP. Many people wondered whether his absence would even be noticed.

Before the weekend, we’ll receive further updates on the negotiations. My crystal ball tells me we’ll hear some progress has been made, time is running out, both sides are working hard to secure a deal, and there are still major disagreements.

Another deadline will pass. A few more days will be found to work out the details and reach some agreement. Yet another “last chance saloon”. There’ll be talk of an extension, though they’ll call it something else. The threat of no deal will be bandied about, but the talks won’t be over. Or they will be, then they won’t be.

There are rumours the EU may offer the UK a “take it or leave it deal”. While EU lawyers are looking at ways to “rush through” the ratification process, there’s also talk of an emergency plan to delay the vote. All of which makes it increasingly difficult for the UK to suggest that it is the EU, not themselves, that are making a deal less likely.

Of course, I could be wrong, and a deal could be agreed this week. It will be a poor deal, but it will be better than the alternative. It will be sold to the British public as a “win” by the same snake-oil salesmen that sold us the “sunlit uplands” unicorn Brexit and, despite our better judgement, we’ll sigh with relief.