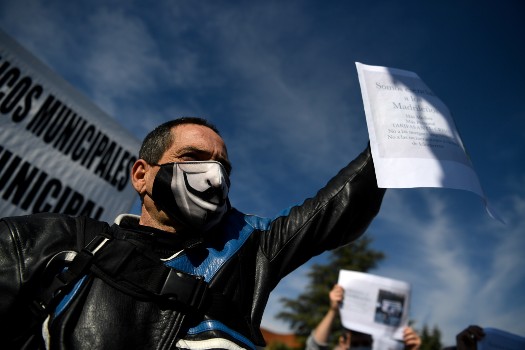 Dozens of striking funeral home workers protested at the entrance to Carabanchel cemetery in southern Madrid on All Saints Day, when Spanish families traditionally visit the graves of loved ones.

They blared horns and called for Madrid mayor Jose Luis Martinez-Almeida to resign as a steady stream of people, many carrying flowers, made their way into the cemetery which limited its capacity for the holiday.

SEE ALSO: What to do if you suspect you have Covid-19 or need a test in Spain

The municipal funeral home needs at least “15-20” more staff to handle a surge in Covid-19 deaths and avoid the “improvisation” that took place during the first wave of the pandemic, said Manuel Carmona, the head of the works council at the company in which the firm's main unions are represented.

During the height of the start of the pandemic in late March and April the burial of residents of Madrid took five to six days and cremations had to be carried out in cities hundreds of kilometres away due to a lack of capacity.

Madrid ice rink had to be used as a makeshift morgue for coronavirus victims, Carmona recalled.

“We don't want to be accomplices of this irresponsibility,” he added.

The Madrid municipal funeral home operates 14 cemeteries, including the one at Carabanchel, as well as two morgues and two crematoriums. It currently employs 478 people.

The company's workers staged another 24-hour strike over the same issue in September.

Despite the many restrictions imposed in Spain since July, when the number of cases began rising again, infections have spiralled.

The health ministry on Friday reported 25,595 new confirmed cases — the largest one-day jump of the second wave of the pandemic.

Capacity at cemeteries in Madrid was reduced this year to half for All Saints' Day because of the pandemic and groups of visitors were limited to no more than six.

To enforce the rules Madrid city hall said it would deploy up to 300 municipal police at cemeteries and two drones at cemeteries in the Spanish capital over the weekend.

Posters at the entrances to Carabanchel cemetery, one of Madrid's largest, urged people to keep their visit short and to bring their own water for flowers so as to avoid touching water fountains.

But inside several groups larger than six though could be seen gathered around graves. Some people brought folding chairs to sit for an extended period by a grave.

Local authorities also urged people to spread out their visits to cemeteries over the entire weekend to avoid large crowds on All saints Day.

“If I did not come today I would feel like I was abandoning him, like I had forgotten him,” said Irene Morales, 73, who was visiting the grave of her husband who died five years ago.