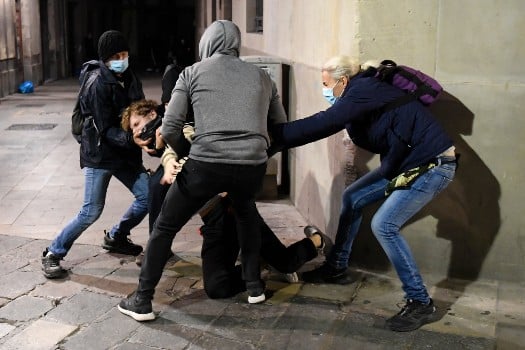 Police in plain clothes arrest a person during a demonstration against evictions amid the pandemic in Barcelona. Photo: AFP

In some cities, looting and vandalism broke out on the fringes of the protests.

The biggest disturbances were in Madrid where scores of demonstrators chanting “freedom!” torched rubbish bins and set up makeshift barricades on the city's main thoroughfare, the Gran Via, images on social media showed.

When police moved in to clear the gathering, they were pelted with stones and flares.

In Logrono, the capital of the northern wine-producing region of La Rioja, a small group of people burned garbage bins and smashed shop windows.

The trouble broke out following a peaceful protest against the closure of restaurants and bars in the region as part of widening virus restriction in Spain.

Hooded youths wearing face masks ran out of a clothing shop with armfuls of items in their hand as a security alarm bared, images on local media showed.

“We earn our living working and in five minutes they destroyed our lives,” the owner of the shop, Cristina Perez, told a local television station.

Another ten people were detained in protests held in the northern cities on Bilbao and Santander, she added.

In the southern city of Malaga a small group of demonstrators overturned rubbish bins and threw bottles at police.

Prime Minister Pedro Sanchez condemned the unrest. “Violent and irrational behaviour by minority groups is intolerable. It is not the way,” he tweeted.

“Only from responsibility, unity and sacrifice will we be able to defeat the pandemic that is devastating all countries.”

At least 20 police officers were injured on Friday night in clashes with protesters in central Barcelona and 12 were arrested.

Spain last week imposed a nationwide nighttime curfew to try to halt the rise of Covid-19 infections and almost all of Spain's regions have imposed regional border closures to prevent long-distance travel.

Despite the many restrictions imposed in Spain since July, when the number of cases began rising again, infections have spiralled. The virus has killed more than 35,000 people in Spain and infected more than 1.1 million.

SEE ALSO: Clashes break out in Barcelona over virus restrictions