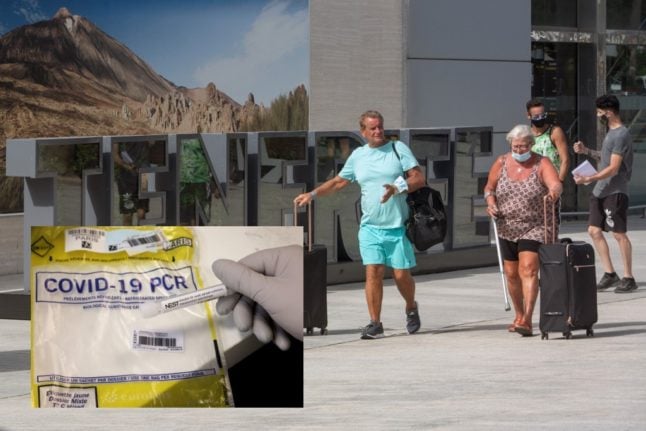 UPDATE: From November 23rd travellers from high risk countries to all destinations in Spain (including Canary Islands) must present a negative PCR test taken within 72 hours prior of arrival required before travel. READ MORE HERE

The new rules state that in order to check in to their holiday accommodation, visitors must show a PCR or negative antigen test carried out a maximum of 72 hours in advance of their arrival on the islands.

The measure applies to all tourists over the age of 12, whether from elsewhere in Spain or abroad staying in hotels or rented accommodation on the islands.

Those who do not have a test before arrival on the islands will be able to get a test locally and isolate in their accommodation while it processed.

The decree states that it is the hotel’s responsibility to inform guests ahead of time that they need to show proof of a negative diagnosis on arrival and must also inform guests of how to get one locally if needed.

Guests must also be informed of the obligation to download the governments track and trace app, Radar Covid.

Residents on the Canary Islands who may want to stay in a hotel on their own island or another one will have to prove that they have not left the archipelago for at least 15 days before checking in, the Minister of tourism explained in a press conference on Thursday.

The same applies to non-residents of the Canary Islands who can prove they have already spent 15 days on the islands before checking into new accommodation.

The Canary Islands is the only region exempted from the nationwide curfew declared under the state of alarm, due to the fact that it has a much lower incidence rate of coronavirus cases than the rest of Spain.

But authorities fear infections could grow with the influx of tourists expected now that the archipelago has been added to a “safe travel list” by the UK and Germany.

Why are checks carried out at accommodation check in and not on arrival at airport? Canary Island authorities have long been lobbying for some sort of test certification for arrivals but there isn't a straightforward legal mechanism to allow it.

Regional premier Ángel Victor Torres explained on Monday that they had looked into carrying out test certification on entry at the islands’ airports as they do in Italy, but regional authorities have no legal power to do this unless they declare a state of alarm over the region.

Instead they have worked out a legal way that means accommodation providers can insist on negative tests being shown at check in on arrival.

Will we need a negative test to fly?

Not necessarily as the airlines themselves won't insist on it. However, if you have booked with a tour operator they may insist on travellers having a negative test before they leave to quicken the check in process at hotels and avoid quarantine issues rather than wait until you get to the destination.

What if I don’t have one? If you didn’t have a test carried out in your home country before leaving for a holiday in the Canary Islands then on arrival at your accommodation you will be redirected to alocal health centre, clinic or laboratory in the Canary Islands for a test. You will then have to remain in isolation until the results come back.

What if I test positive?

Obviously if the test comes back positive before you leave for your holiday, then you shouldn’t travel. And if you wait until you get to the islands and then test positive then you will not be allowed to check in to your accommodation unless there are facilities to stay quarantined while there.

What kind of tests are valid?

Authorities said they would accept PCR or negative antigen tests conducted within 72 hours before arrival on the islands.

Who pays for the test?

The costs of the tests will have to be borne by the traveller, either before departure or on the island at a private health centre at your destination.

When will it come into force?

The decree was passed on Thursday October 30th and was published in the Canary Islands Official Gazette (BOC) on October 31st. It will come into force after ten working days from that date, to ensure that hotels and tourist accomodation providers have enough time to inform guests of the new requirement.

Hence from November 13th the tests will be a requirement by law.

The decree also states that all new arrivals are obliged to download the government track and trace app known as “radar covid” and must be informed to do so by their accomodation.

Radar Covid: What you need to know about tracing app Spain says you 'must' download

And in the meantime?

Until the new law comes into force, tourists arriving in the Canaries will need to pre-fill health questionnaires, obtain a tracking code and may have their temperature taken on arrival at airports, measures that are also in place at all Spanish airports.

These will continue to be a requirement even with negative test certificates once the decree comes into force.