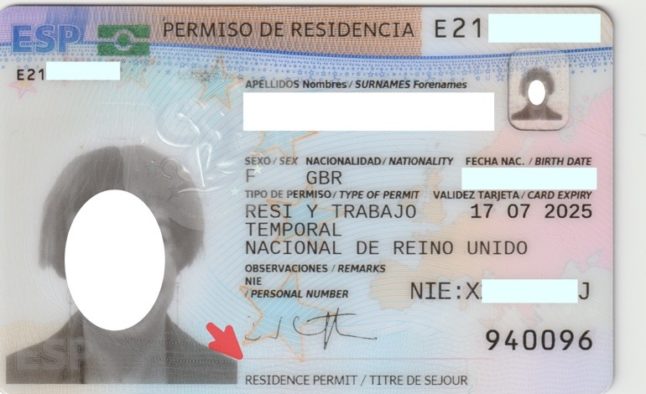 Photo of new TIE card for British residents in Spain, with arrow pointing to the correct wording/status on the cards. Photo: British Embassy in Spain

Ever since the Spanish government started issuing the new biometric TIE cards “Tarjeta de Identidad de Extranjero” on July 6th, this question has been the subject of much debate among Britons who already have a green A4 residency certificate or a small green residency card.

That’s despite the fact that the official message from the British Embassy and Spanish authorities has been clear from the start: the TIE card is optional for Britons who were registered before that date.

“While you may choose to change your current certificate for a TIE at some point in the future, there's no requirement to do so,” British Ambassador to Spain Hugh Elliott stated back in July and has continued to do so.

The BOE bulletin by the Spanish government which announced the launch of the TIE also confirmed this by stating that Brits who are already registered in Spain “will not have the obligation to apply for a new resident status nor, therefore, undergo a new documentation process, but they will have the right to receive a residence document that expressly reflects their status as a beneficiary of the Withdrawal Agreement”.

However, these reassurances haven’t convinced many British residents in Spain who are choosing to apply for a TIE now.

Mark Stucklin of Spanish Property Insight recently wrote an opinion piece on his website titled “British residents in Spain, don’t forget to apply for your TIE (Foreigner’s ID) card this year, just to be on the safe side”, in which he explained why he chose to apply for the card as “you never know what’s around the next corner with Brexit, so better safe than sorry”.

From a practical standpoint, the TIE is a hard, laminated card that is certainly more durable than the old A4 residence paper certificate or card.

But there are other potential advantages to the TIE relating to Britons’ status in Spain.

Nigel Aston, President of EuroCitizens, a lobbying group which fights for the rights of British residents in Spain, told The Local: “Holders of green cards/A4 papers can retain those as an alternative to the TIE, at the moment, in perpetuity.

“That may change in the future but the Spanish have, as yet, given no contrary indication.

“Nevertheless, the EuroCitizens' advice is to get a TIE.

“(Given the Spanish government’s stance) there is no rush but we recommend doing it for convenience reasons and, more fundamentally, as it confers status.”

Aston told The Local that the advantage of the TIE as envisaged in the BOE is that it clearly states that the holder is entitled to the rights set out in the Withdrawal Agreement and distinguishes between initial residency and permanent.

“The TIE for registered UK citizens living in Spain at 31 December is annotated to show that the holder is “protected” by the citizens' rights provisions of the Withdrawal Agreement.

“Whilst most officials in the Spanish administration and, indeed, counterparts in other Schengen states will recognise this protection in the passport/green docs, probably some will not, potentially causing bureaucratic issues.

“Holding the appropriate TIE, therefore, is a clear, unambiguous, confirmation of ongoing rights.”

However, there are two important setbacks Britons who are applying for the TIEs are facing which may push those who don’t need to apply to hold off for the moment.

Many Britons who have received their new residency cards in Spain have noticed that they contain information which isn't accurate.

“Some of the new TIEs obtained via the EX23 route (those who already had a green residency and just wanted to exchange them for the TIE) have picked their cards up from several different areas of Spain but they are wrongly worded,” Anne Hernandez, head of the Brexpats in Spain organisation, told The Local.

These biometric cards, which should have the wording at the bottom saying “Residence Permit/Titre de Sejour” instead state “family member of a Union citizen”.

“Some of the TIEs are also wrongly dated,” Hernandez adds.

“A permanent TIE card should be 10 years but it seems they are being dated to expire in 5 years”.

READ MORE: What we know about the two mistakes on the TIE residency card

There is also the issue of the lack of TIE appointments being made available, which is particularly worrying for those who have never registered rather than for residents.

“Those who are desperately trying to get their TIEs for the first time and benefit from the Withdrawal Agreement are very stressed because appointments are few and far between, Hernández told The Local.

“(Therefore my advice to residents) who choose to apply for the TIE is to leave it till after December 31st.

“It seems rather selfish to do it now, thereby further reducing availability of appointments before the end of the transition period.

“So think of your fellow Brits and wait till 2021 if you wish to exchange your green residency for the TIE but there is no obligation to exchange it.”