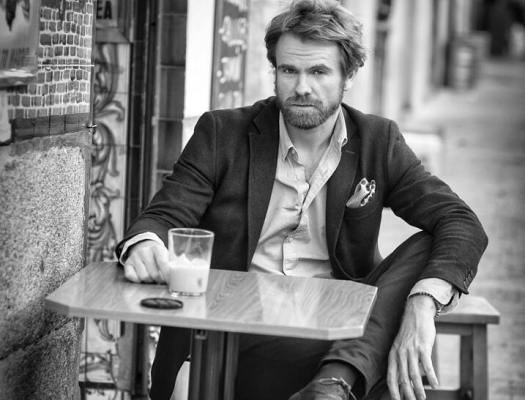 In a chaotic studio space in Madrid’s hip Chueca district, this anglo-Spanish redheaded painter (his father is Basque while his mother came from London) can be found daubing oil paint onto huge canvases while he sings at the top of his voice to Brit pop classics from the 1990s.

But his exuberant character and decadent dandy style of dressing – think paint splattered tweed suits or stripy blazers always with a bright coloured handkerchief peeping from the label pocket – belie a dark and twisted soul, at least if his latest series of paintings are anything to go by.

His current exhibition presents the “Lockdown Series”, a collection of paintings produced during Spain’s State of Emergency when for three months Madrileños were confined to their homes, unable to go outdoors even to exercise. Two works from the series; “Falling into the abyss” and “Sorrow” both oil on board.

The paintings are grotesque, horrifying, bleak and brilliantly powerful. Comparisons have been drawn between Baleztena’s latest works and Goya’s Black Paintings. Was the similarity in style deliberate?

“It wasn’t deliberate at all, just a coincidence,” the 44-year-old artist insists. “I can see the similarities but it just so happened that during my bleakest period I expressed the psychological horror in much the same way that he did during his. I actually think we have very similar personalities.”

The collection of work has been broadly praised by critics and several paintings have already been snapped up by collectors. A portrait of Pedro Sanchez entitled “The Pyschopath” and the evoctaively entitled “This is what happens when you eat bats”.

So looking back at lockdown, was it the best thing that could’ve happened to him? At least in terms of his career?

“It was a unique experience,” Baleztena explains. “Lockdown was not something I chose and I don’t want to go through it again but in the artistic sense it’s been very productive and produced some sort of inspiration that I just wouldn’t have had if I wasn’t confined.

“My brain was like a cauldron of ideas ranging from psychological angst of being locked in to the fears of the virus itself and the impact it had on politics and economics. And that inspired me to paint.”

“It’s like the war for our generation. Our liberty was taken away and we didn’t know really what was going on plus it was frightening, much like people in the blitz going into a tube station and not knowing if they would be bombed. It’s a bit of a mind test,” he explains in perfect English with just a hint of a Spanish accent.

“Death” and “Fear” from the Lockdown series by Tomás Baleztena

“The paintings are pretty dark and terrifying, Yes, I wasn’t inspired to paint beauty,” he said with a sardonic chuckle. “And it continues to be very dark especially when we consider the future and the economic hurt coming Spain’s way.

“Not forgetting the uncertainty of the illness itself some people go through it without even knowing it while others just die in horrible ways, It’s very confusing and quite uncomfortable but very inspiring in an artistic way.”

For Baleztena, who studied fine art in London before moving backing to Madrid where he now lives with his wife, fashion designer Amy Molyneaux and their two young children, the year 2020 has been the most prolific to date.

“Honestly I didn’t find anything positive about this whole coronavirus crisis apart from the fact that it inspired me to paint a lot. I’ve already produced more than 200 paintings this year.”

“Obviously I don’t want a pandemic going on just to provide me with inspiration but I’ve tried to turn a negative into a positive.”