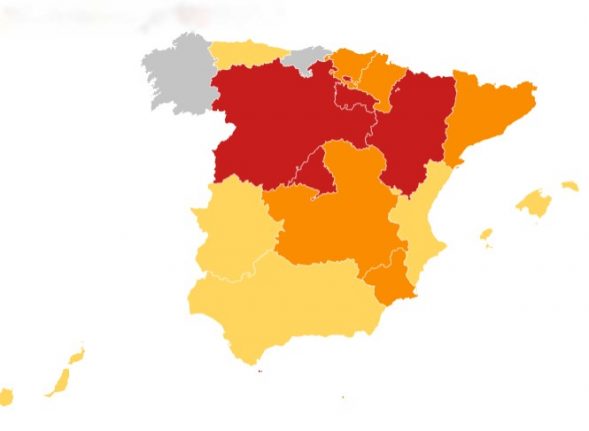 Spain will be divided in four categories depending on infection rate and pressure on hospitals.

The draft plan establishes a set of clear criteria to designate regions within a four tier system of low, moderate, high and extreme risk.

An established set of measures and restrictions will be applicable to each tier depending on the risk level ranging from broad social distancing measures in the low risk areas to “exceptional measures” such as perimeter confinement for those that fall into the  “extreme risk” category.

What we know so far

The plan is only at the draft stage at the moment and will need to be presented to a committee of the regional authorities and then approved before it can come into force.

How is it different from the plan approved on October 2?

That plan, which won majority approval of regional governments but was challenged by Madrid’s regional government in the courts, only recognised the need for partial lockdown in municipalities with a population over 100,000 if they met three criteria: The area must have reported more than 500 cases per 100,000 inhabitants over the previous 14 days; it must have 35 percent or more intensive care beds occupied by Covid-19 patients, and positive results in at least 10 percent of PCR tests.

But this new plan covers all municipalities with over 5,000 residents and works on a traffic light system, aimed at identifying problem areas and curbing the rise in infections before it becomes critical. How are the risk categories calculated?

The Health ministry draft outlines a set of criteria within two defined parameters to determine risk.

The first set measures coronavirus transmission using six metrics: the 14-day and the seven-day cumulative incidence per 100,000 people; the same two indicators applied exclusively to the 65-and-over population; the positivity rate (amount of tests that come back positive out of the total) and the percentage of cases that can be traced back to the source of infection.

The second set measures the ability of the healthcare system to cope with the infections by looking at the number of hospital admissions and percentage of intensive care beds occupied by Covid-19 patients.

Each indicator is assigned a value. The threshold for extreme risk is a 14-day cumulative incidence of more than 250 cases per 100,000 people, and a seven-day incidence of 125. These figures fall to 150 and 75 for the 65-and-over population. A positivity rate of 15 percent and a traceability of under 10 percent are also considered hallmarks of extreme risk.

In the second set of parameters, extreme risk is defined by more than 20 percent of regular hospital beds being occupied by Covid-19 patients and more than 25 percent of intensive care beds.

If a zone meets two or more of the criteria from first set and at least one from the second set then it falls into the extreme risk category.

What restrictions will be in place for each of the four categories?

The rules for each risk category are broadly a reverse of the de-escalation phases put in place to bring territories out of the complete lockdown during Spain’s state of emergency.

For Level 3 and Level 4 restrictions could include limiting social meetings to below six people and possibly banning social contact with those outside of “established bubbles”.

It could also establish set hours for vulnerable groups such as those over 70 years of age to leave the home, exercise and visit the shops.

In the two higher risk groups it is likely that working from home will be recommended where possible and limits will be placed on the numbers allowed at religious services, funerals and weddings.

For the first time in Spain, the draft considers reducing the number of people allowed on public transport to 30 percent on trains and buses.

It also suggests reducing the capacity at commercial premises to just 25 percent.

The draft outlines plans to ban eating and drinking inside restaurant premises and only allow table service on terrazas with 50 percent occupancy.

For Level Four there will be a provision to introduce “extreme measures” such as confinement of populations to within their own municipality but such measures could be decided by the regional authorities rather than the state.

The lower risk levels will see various lighter restrictions placed such as early closure of bars and restaurants and social groups limited to six people but the exact details have not been made public.

How would Spain look under the new system?

The system isn't in place yet but according to the criteria set out in the proposal it is possible to use the data currently available for each region to work out which alert level they will fall under.

Based on the data currently available at least four regions of Spain fall into the highest of the four tiers that of Madrid, Aragon, Castilla y León and La Rioja. Spain’s north African city enclave of Ceuta also falls in “extreme risk” after a recent surge in infections.

The next category down, labelled “high risk” would currently include  Castilla-La Mancha, Catalonia, Murcia, Navarre and the Basque Country, besides Spain’s other exclave city in North Africa, Melilla.

The “moderate risk” category would contain Andalusia, Asturias, Valencia and Extremadura as well as  the Balearic Islands and the Canary Islands.

Only the regions of Cantabria and Galicia have data good enough to put them in the “low risk” tier.

How reliable is the coronavirus data coming from Madrid?