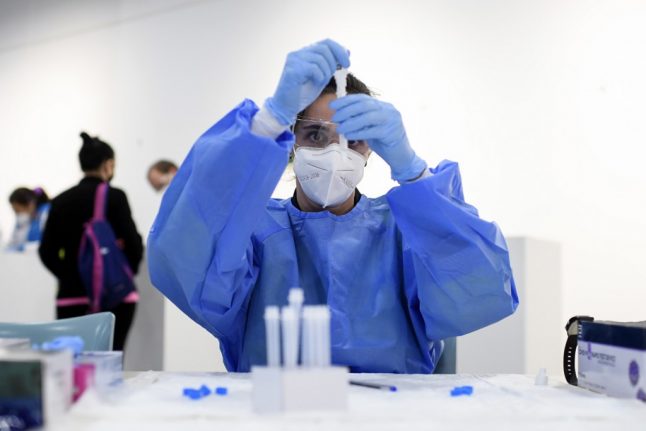 Conflicting data is coming out of Madrid. But who can we believe?Photos: AFP

After a major standoff over the partial closure of Madrid, Spain's government is now locked in a numbers fight with regional authorities who are relentlessly demanding the restrictions be lifted.

For days now, the leftwing government of Prime Minister Pedro Sanchez has been casting doubt on Covid-19 figures from the Madrid public health authorities.

But the region, which is run by a rightwing coalition led by the conservative Popular Party, has hit back furiously, with the PP accusing the government of using “false figures” to justify imposing a state of emergency in Madrid.

Under the measure, some 4.5 million people in the capital and eight surrounding towns are allowed to leave city limits only for essential reasons linked to work, school or healthcare. Citing much improved figures, Madrid has repeatedly demanded the lockdown be lifted, hitting out angrily at government suggestions it had somehow massaged the numbers to give a more favourable picture.

“It's a lie, an insult, because they are questioning the honour of the medics” providing this data, regional justice chief Enrique Lopez said on Wednesday.

The restrictions initially went into force on October 2nd and were supposed to apply to any area of Spain with an infection rate of more than 500 cases per 100,000 people over the previous 14 days, which at the time was only Madrid.

Just days beforehand, the regional rate had risen above 780, compared with just 275 in the rest of Spain — itself at the time the highest in the European Union.

Madrid is now pushing for the restrictions to be removed saying its infection rate has dropped to around 460 cases per 100,000 inhabitants.

But the government has since moved the goalposts, now saying the aim is to lower the incidence to around 100 cases per 100,000 people.

“We need to lower the infection rate not to 500 but much further than that, to around 100 or below, only that way will we be able to flatten the curve,” Health Minister Salvador Illa said on Thursday.

At issue is a dispute over differing figures — those compiled on a daily basis by the central government, and those reported within the region.

For Kiko Llaneras who analyses data for the daily El Pais, the discrepancy is technical, with both sides using different cut-off dates, and delays between the transfer of data from Madrid and its processing time at the health ministry.

Beyond that, epidemiologist Fernando Garcia of the Madrid Public Health Association says the government has an “understandable lack of trust” in the daily figures reported by Madrid which are “incomplete” because of delays in reporting infections. On top of that, Madrid changed its protocol at the end of September and stopped testing some close contacts of those who tested positive, which could result in fewer cases being reported.

“If you're looking less, you find less,” he said.

Nobody is in any doubt that the situation in Madrid has improved since infections peaked in mid-September.

But experts say this cannot be attributed to the October 2nd restrictions, nor to an earlier partial lockdown imposed on dozens of areas on September 21st because the effects of such measures have yet to be felt.

Rather, they believe that it was down to precautions taken by residents fearing escalating infections.

“When Covid takes over the news, even if temporarily, people improve their behaviour,” said Fernando Rodriguez Artalejo, a public health expert at Madrid's Autonomous University.

In any event, epidemiologists believe the situation in Madrid is a case of too little, too late given the gravity of the situation.

“They are not enough and they come too late, you cannot start reacting when you reach 700 cases per 100,000 inhabitants, you have to start when you go over 50 to keep the incidence low,” said Ildefonso Hernandez, spokesman for the Spanish Society for Public Health.

“That is the cornerstone of controlling an epidemic.”