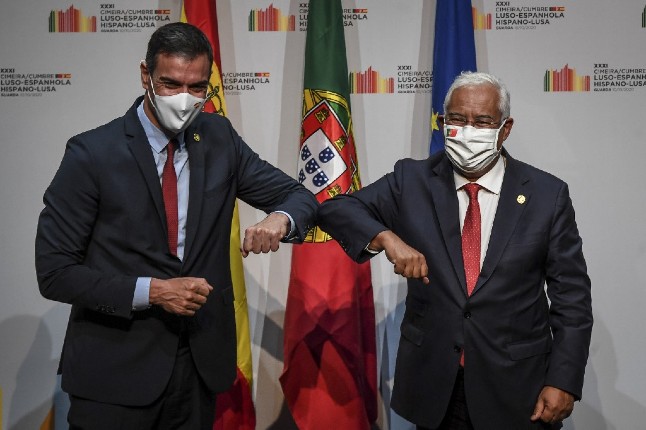 Spanish Prime Minister Pedro Sanchez bumps arms with Portuguese Prime Minister Antonio Costa at the summit. Photo: Patricia De Melo Moreira/AFP
Speaking to reporters at summit in the Portuguese city of Guarda, Pedro Sánchez said that he believed the authorities had legal powers which would prevent them having to prolong the emergency decree.
“We hope to have the pandemic in Madrid under control in a fortnight,” he told reporters, according to the El Pais newspaper.  “Not so much to break the curve, but at least that we have it contained.”
He told reporters that the state of emergency had been necessary after the city authorities in Madrid failed to respond to an ultimatum and a court annulled the central government's original lockdown order.
It would not, he said, be necessary to extend the emergency, both because two weeks of restrictions would be sufficient, and because it restrictions could be imposed using a 1986 law, something he expressed frustration that the Madrid authorities had not done.
“Invoking the 1986 law, which was not done by the Madrid city government last time, but was on the previous six occasions, allows it specifically to impose restrictions with a solid legal protection,” he said
“There are sufficient legal instruments. They have been endorsed by the courts in Castilla y León and in Andalusia. That is why what we ask is to banish this partisan struggle against our common enemy, which is the virus.”
Sánchez’s Socialist-led coalition invoked emergency powers on Friday after the Madrid regional government failed to respond to an ultimatum and a court struck down the central government’s own lockdown order.
“We have always put public health and saving lives above any other consideration and we’ve asked regional governments to do the same,” he told reporters.
He said his government was “offering a hand to the Madrid regional government so we can work together”, but argued that “the situation demanded a response and we couldn’t just sit on our hands”.
Madrid has insisted that the highly localised lockdowns it had instituted were starting to have an impact.
“What we have here is the most authoritarian government in the history of democracy,” the Madrid regional president, Isabel Díaz Ayuso, told El Mundo. “The justice system, the Madrid region, the king and the law are standing in the way of Pedro Sánchez, who’s trying to change this country through the back door.”