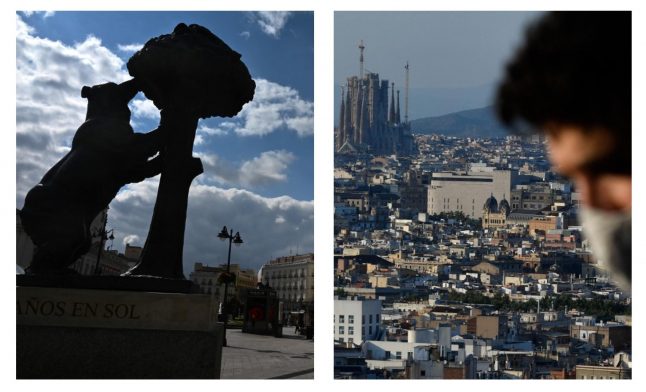 This is a tale of two cities and how they have coped – or not – with the second wave of coronavirus.

As millions of madrileños prepare to go into a kind of lockdown, the way Barcelona tackled a similar threat says a lot about the interplay between health priorities and politics in Spain.

Back in the sultry summer days of August, Barcelona was at the epicentre of a surge in Covid-19 cases.

At that time, Catalonia had no-one in charge of its health ministry, only 200 track and trace staff and the number of coronavirus cases was rising by the day. In short, it was in trouble.

Then Josep María Argimon was appointed health secretary and assembled a group of experts and asked them what to do.

They came up with three priorities: roll out mass PCR testing, recruit hundreds of track and trace staff as soon as possible and bring in a proactive plan to contain outbreaks as soon as they happen.

Professor Alex Arenas, a public health expert from the University of Rovira i Virgili in Tarragona, said: “Quickly, they had 1,100 track and tracers, there were limited restrictions imposed in places like Lleida, Hospitalet and Reus, where there were outbreaks and there was mass testing.

“We are not out of the woods yet but it made a lot of difference.”

Madrid, which accounts for about a third of all Spain's coronavirus cases, is one of the worst-hit regions in Europe. By Thursday, the number of people who tested positive with Covid-19 in the capital was 695 per 100,000 inhabitants during the past 14 days, compared to 144 in Catalonia, according to Spanish government data. Across Spain the average is 274.82.

In Madrid, 23.66 per cent of beds are being used for coronavirus patients, compared to 5.42 per cent in Catalonia, while the national average is 8.98.

Professor Arenas says Madrid is in a moment of crisis precisely because it failed to take the same steps as Catalonia.

“It has not done the things which have stopped the infection rate rising in Catalonia. It is a problem for all Spain because Madrid is the business and transport hub for the country,” he said.

“The politicians have not followed the advice of health professionals. They have put the economy first. It is a problem in many countries, not just in Spain.”

Angela Hernández, vice-president of the Madrid Doctors' Association, claimed that track and trace is non-existent in Madrid.

“We have been left to manage on our own and the health centres and hospitals are coming under increasing stress,” she said. On the streets of the Spanish capital there is a mixture of confusion about how the regulations will work mixed with anger about how Madrid has reached this point.

“The bars and restaurants were filled last night. It was almost as if everyone was drinking at the last chance saloon,” said one resident.

“It is not really clear when the restrictions will come into force. Will they be from Saturday morning or will the court hold them up at the last minute?”

Isabel Díaz Ayuso, the Madrid regional president, has appealed against the restrictions imposed by the government, which could delay their implementation. Watch this space.

It is the latest twist in weeks of bickering between Spain's left-wing coalition government and the conservative authorities running the Madrid regional government.

Ayuso said she would obey the restrictions but said the battle is not over. She believes shutting down the capital would ruin its economy.

Inevitably, the row between the politicians has spilled onto the streets.

“Some people who are on the left blame Ayuso for not investing in the health service and putting the economy first while those on the right say it is all Sanchez's fault,” said another madrileño who did not want to be named.

Over on the Mediterranean coast, things are much as normal with bars and restaurants full and people out at night in Barcelona.

“People look at you like you are weird if you are not wearing a mask. It is universal, unlike in Britain. But apart from that, people are out and about so things are pretty normal – except for the fact that there are no tourists,” said Graham Hunter, a British sports journalist who has lived in the city for the past twenty years.

What remains to be seen is whether the partial lockdown in Madrid and nine surrounding towns in the region will contain the spread of Covid-19.

Whatever happens, one thing is perhaps worth remembering.

This may be a lockdown but the restrictions are nothing like the state of emergency which was imposed in March.

People will still be able to move around the city providing they have the correct paperwork.

Having said all that, there is a depressing feeling that nearly 5 million people are back under lockdown – six months after the first state of emergency.