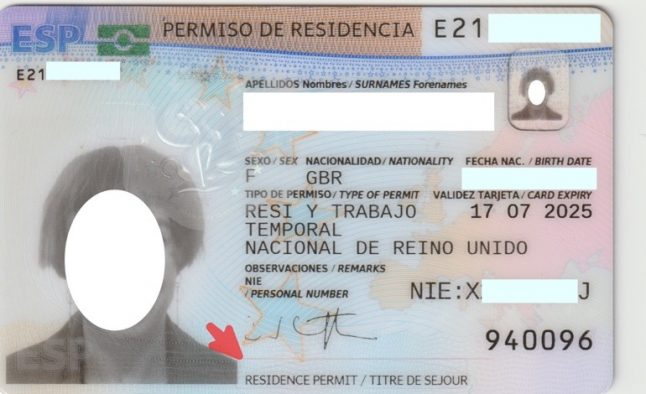 What are the mistakes?

“Some of the new TIEs obtained via the EX23 route (those who already had a green residency and just wanted – it is optional – to exchange them for the TIE) have picked their cards up from several different areas of Spain but they are wrongly worded,” Anne Hernandez, head of the Brexpats in Spain organisation, told The Local.

These biometric cards, which should have the wording at the bottom saying “Residence Permit/Titre de Sejour” instead state “family member of a Union citizen”.

“Although they say ‘issued in accordance with the Withdrawal Agreement’ they also say a family member of an EU citizen,” Hernández said.

In theory, this would suggest that the residency card was obtained by being a spouse or a family member of a Spanish or other EU citizen, rather than it being a British person who has obtained the card in their own right by residing in Spain before December 31st 2020.

“Some of the TIEs are also wrongly dated,” Hernandez adds.

“A permanent TIE card should be 10 years but it seems they are being dated to expire in 5 years”.

What’s being done about it?

The British Embassy published a post on Facebook on September 18th informing Brits in Spain about the wrong wording on the TIEs, adding that they had “raised this with the Spanish authorities who confirm that this was an administrative error”.

“Although this has now been corrected, cards with the incorrect wording may still arrive at police stations in the next few days,” the British Embassy added.

However, there are still comments being posted by Brits on groups such as the Citizens Advice Bureau Spain in late September, suggesting that some of the wrongly worded and dated TIEs are still being issued.

No mention has officially been made yet about the fact that permanent TIEs are being wrongly dated to expire in 5 years rather than 10.

“We have been given to understand that these erroneous TIEs will be replaced by ones with the correct wording in due course,” John Carrivick, Vice President of Eurocitizens group, told The Local.

“This appears to be an error in production of the cards and not fundamentally one in the actual process of issuing TIEs themselves”.

Many TIE applicants have also pointed out that they have received the cards with the correct information on them.

But there are reports of the wrongly worded or dated cards being sent to police stations all over Spain, from the Canary Islands to the Balearics, Andalusia and the Valencia region.

Are the cards valid?

“The Spanish authorities have confirmed that, despite the inscription, these TIEs remain valid and we are waiting for instructions on how you should exchange this card for the correct one,” The British Embassy explained.

“We will post this information as soon as we have it.”

“In the meantime, there should be no question of the validity of the ones issued so far,” Carrivick reiterated, whose group Eurocitizens defends the EU citizenship rights to live, work and study for UK nationals in Spain and Spanish nationals in the UK.

“Even though the wording is erroneous, it doesn't affect the applicants' rights in Spain.”

But despite reassurances, many Brits in Spain who have received inaccurate TIEs do not feel at ease with having a document that doesn’t correspond to their status as the end of the Brexit transition period fast approaches.

The British Embassy and different rights group are in contact with Spanish authorities to find out when the cards can be replaced.

In some cases, police stations are sending the cards back when applicants immediately notify them of the wrong wording and dating upon collection.

Spanish authorities do require foreigners in Spain, especially third-country nationals, to apply for a different residency document if their status changes ie divorce from EU national, temporary to permanent residency after 5 years etc

This suggests that sooner or later, the issue of wrong wording on the TIEs for UK nationals will have to be addressed.

On October 23rd the British Embassy posted an update on the issue stating that the cards issued with wrong information could be replaced for free at any police station.

Many of you who were issued with TIEs which wrongly state that you are an EU family member, have been asking us how to…