Noise is part of daily life in Spain, but what can you do if you are constantly being bothered or woken up by a neighbour’s banging or a dog barking while you’re at home? Here is a round-up of the laws protect you and the steps to take action.

While it’s true that you can find yourself living in a noisy environment in any country, Spain pretty much tops the decibel tables.

The Iberian nation is only beaten by Japan as the most ear-splitting country on the planet, according to the World Health Organisation.

And although traffic is reportedly responsible for 80 percent of noise pollution in Spain, there is plenty of clatter keeping people awake (or out of their minds) at home.

Sixteen percent of Spanish households put up with noise produced by neighbours or from outside, according to Spain’s National Statistics Institute (2016).

So what can you do if a noisy neighbour or the rowdy bar next door are disturbing your peaceful time at home? Turns out you may have more rights than you thought.

What does Spanish law say?

Exceeding legal noise levels and disturbing the peace of people’s home is considered a violation of the right to personal and family privacy in the Spanish Constitution.

Spain’s national Noise Law was first created in 2003 but other specific regional and municipal regulations also apply in many towns and cities.

According to Noisess, a Spanish company specialising in carrying out noise pollution assessments, the legislation isn’t too clear when it comes to noise disturbances at home.

‘Domestic noise’ as they call it(from neighbours, pets, use of electrical appliances) and noise from construction sites, mopeds, garbage collection, festivals in the street are out of the reach of state law.

So as with so many other official matters in Spain, the responsibility falls to regional or municipal authorities to decide in most cases.

For example, in Bilbao, Valencia and Zaragoza, it is forbidden to carry out any construction or refurbishing work at home from 10 pm to 8 am on weekdays (9.30 am on Saturdays and holidays) while in Barcelona and Madrid the ban begins earlier at 9 pm.

According to Spanish consumer rights watchdog OCU, these are the decibel limits during the day and at night in different parts of Spain, for bedrooms in the first two columns and other rooms in the second two columns.

This reliance on local legislation also applies to noise from a bar in your neighbourhood that’s keeping you up at night, although again different cities and regions will set their own time and decibel limits for nightlife establishments.

What are the steps to follow if you have a noisy neighbour?

1. Talk to your neighbour

Before you get involved in any official complaints or calls to police, start by trying to talk to the neighbour making noise in person. They may not even realize how loud they’re being so sometimes just by bringing the matter up, the problem can be solved more quickly, easily and amicably.

2. Get a copy of your local noise bylaw

If they don’t respond favourably to your conversation, the next step is to get a copy of your local noise laws.
Most municipal bylaws have a clause banning excessive and unreasonable noise; whether it be continuously barking dogs, very loud televisions and music, or excessive banging.

You can look online for these “ordenanzas de ruido” or go in person to your town hall or public library to access them. Make a copy to give to your neighbour as a casual reminder and warning that they are breaking the law.

Start making a note of all irritating episodes of loud for future reference.

If you belong to a community of owners then you can also bring the noise issue with them for advice on how to handle it.

3. Warn your neighbour in writing

If neither of these steps works, it’s probably time to warn your noisy neighbour in writing.

Although this should never come across as threatening, kindly inform your neighbour/s that if the noise problems don’t stop, you will take the matter to authorities. Include a copy of the previous noise bylaw with your letter and keep a copy of it for yourself in case you are forced to sue your neighbour in court. 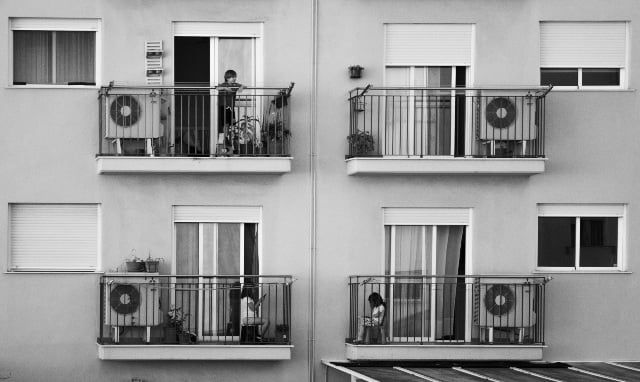 Inevitably if all of the above doesn’t work and the noise has become a constant and increasingly bothersome problem, you’re probably left with no choice but to call the police.

You can call the police in connection with a noisy neighbour from the first time the noise becomes loud, regardless of the situation. However, the officers will be more sympathetic to you if they see that you have repeatedly tried to solve the problem on your own.

Some local police offers will use sonometers to measure the decibel levels, which in residential areas have limits of 40 to 30 decibels in normal rooms and 35 to 25 in bedrooms.

Making a “denuncia” (filing a complaint) may also involve a trip to your nearest Guardia Civil police station. You will have to provide proof of ID and have a translator with you if you’re not fluent in Spanish.

5. File an official complaint for noise

If even a police warning hasn’t resulted in any change, the final step is to take the matter to court. To be able to claim for damages, you will need to prove the existence of excessive and disturbing noise, a decrease in your wellbeing at home due to the noise as well as evidence that you’ve repeatedly addressed the matter with your neighbour.

Any police report, recordings or witness testimonies can help with your case.

A community of neighbourhours can also file an official complaint if they’re all affected by a neighbour’s noise, according to Spain’s Commonhold Property Act (Ley de la Propiedad Horizontal).

If the judge rules in favour of the plaintiff/s, the noisy neighbourhood may have to pay compensation, be forced to leave the property for up to three years if they own it or have their contract terminated if they are tenants.